Today, the Space Foundation family joins with the rest of America and the world in remembering and honoring the life and legacy of President George H. W. Bush, 41st President of the United States. 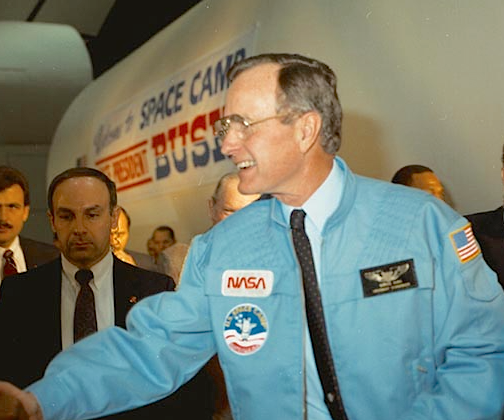 George H.W. Bush at Marshall Space Flight Center for a campaign
event in 1987.

Tom Zelibor, CEO of the Space Foundation reflected, “While much of his legacy is for his leadership in ushering in the post-Cold War era, President Bush was also an extraordinary point of light for many in the space community.

His support for America’s return to flight after the loss of Challenger; restart of the National Space Council; advocacy for early commercial space pioneers; push for the STEM education mission with educators and the Challenger crew families; and pioneering new efforts to explore the Moon, Mars and universe around us, are all legacies that are shaping today’s space renaissance.

His light, truly showed us the way for a better world and we are all the better for it. A grateful nation is truly in his debt.”

Some of the notable Space Achievements of President George H. W. Bush

For more information about the Space Foundation mission