[SatNews] The latest advanced instrument that will fly on NOAA’s next-generation Geostationary Operational Environmental Satellite-R (GOES-R) spacecraft is completed and cleared for installation onto the satellite.

The Space Environment In-Situ Suite, or SEISS, is GOES-R’s instrument for monitoring radiation hazards to astronauts and satellites. In addition, the information from SEISS, which is comprised of five sensors, can be used to warn of space weather events that could disrupt radio communication. Data from SEISS will be incorporated into the solar radiation storm portion of NOAA space weather scales and other alerts and warnings, and it will improve energetic particle forecasts.

“This is an exciting time for GOES-R, as the instruments are meeting the milestones that put them on the path to integration with the spacecraft,” said Greg Mandt, GOES-R System Program Director. “SEISS is a critical instrument to ensure radiation hazards that impact satellites, radio communications and navigation systems are monitored.” 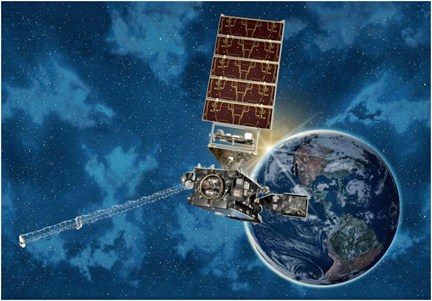 Other GOES-R instruments, including the Extreme X-Ray Irradiance Sensor and Advanced Baseline Imager, were completed this year and are also poised to be integrated onto the spacecraft.

The remaining GOES-R instruments to be delivered are:

GOES-R’s instruments will feature improved terrestrial and solar weather monitoring tools and will provide near real-time data to forecasters during severe weather events. The first satellite in the GOES-R series is currently scheduled for launch in early 2016.