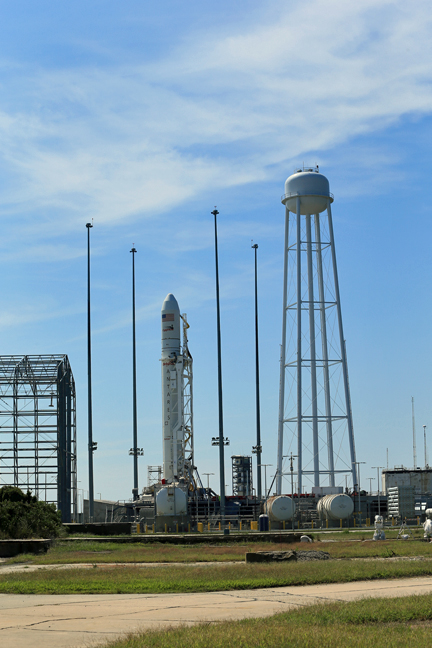 Orbital's Antares on its launch pad, photo courtesy of NASA.
[SatNews] Following a launch review meeting, Orbital’s Antares team has decided to postpone the launch of the COTS Demonstration mission from Wallops Island, Virginia, by at least 24 hours.

The combination of yesterday’s poor weather that delayed the roll-out of the rocket to the launch pad, plus a technical issue that was identified during a combined systems test held last night involving communications between ground equipment and the rocket’s flight computer, drove the decision to delay the launch.

After comprehensive inspection and testing this morning, the problem was found and turned out to be an inoperative cable, which is now being replaced. Orbital will repeat the combined systems test later today. Once that important test is successfully completed, the team will be able to proceed toward a September 18th launch with a launch window from 10:50 to 11:05 a.m. (EDT)

This vehicle will launch the company’s first Cygnus™ spacecraft to the International Space Station (ISS) for its demonstration mission under the Commercial Orbital Transportations Services (COTS) joint development program with the National Aeronautics and Space Administration (NASA).

Orbital is currently targeting Tuesday, September 17th for the launch during a 15-minute window from 11:16 to 11:31 a.m. (EDT). During the mission, the Antares rocket will boost the Cygnus spacecraft into a parking orbit of approximately 245 x 300 kilometers in altitude, inclined at 51.6 degrees to the equator. Live coverage of the COTS demonstration mission will be available on NASA Television and at http://www.nasa.gov/ntv. 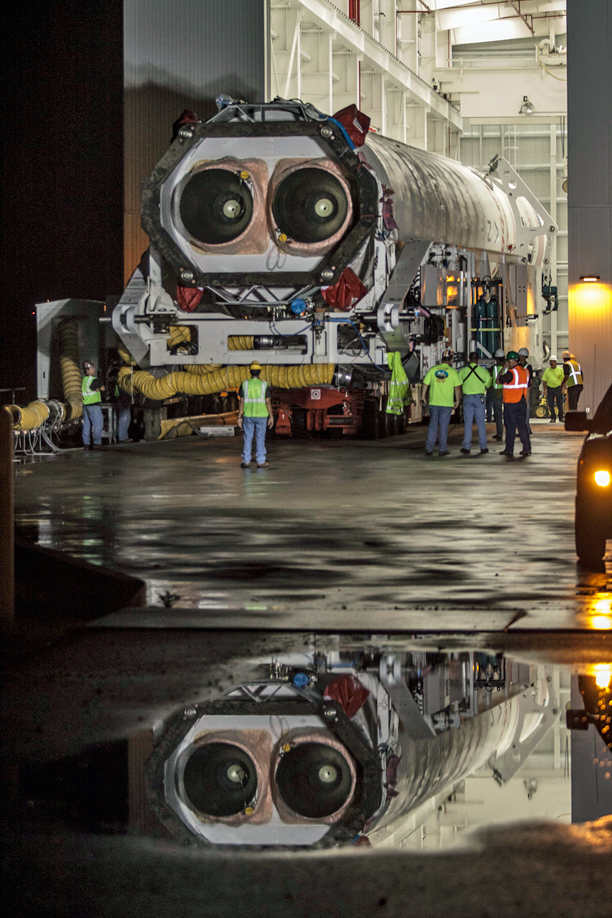 The Antares medium-class launch vehicle will provide a major increase in the payload launch capability that Orbital can provide to NASA, the U.S. Air Force and commercial customers. The Antares rocket will launch spacecraft weighing up to 14,000 lbs. into low-Earth orbit, as well as lighter-weight payloads into higher-energy orbits. Orbital’s newest launcher is currently on-ramped to both the NASA Launch Services-2 and the U.S. Air Force’s Orbital/Suborbital Program-3 contracts, enabling the two largest U.S. government space launch customers to order Antares for “right-size and right-price” launch services for medium-class spacecraft.
Photo courtesy of Orbital Sciences.
Following its launch by the Antares rocket, Cygnus will conduct an extensive series of in-orbit maneuvers and demonstrations over a five-day period to verify that all onboard operating systems are functioning properly and that ground controllers at Orbital’s Mission Control Center (MCC), located at the company’s Dulles, Virginia, campus, are able to command, control and communicate with the spacecraft as designed and extensively rehearsed.

Assuming a September 17th launch, Orbital and NASA are currently targeting the morning of Sunday, September 22nd, for the Cygnus rendezvous, grapple and berthing operations with the ISS at an altitude of about 415 kilometers above the Earth. On its demonstration mission, Cygnus will deliver approximately 700 kilograms of cargo, including food and clothing, to the Expedition 37 crew, which will also load Cygnus with disposal cargo prior to its departure from the station approximately 30 days later.

Mr. David W. Thompson, Orbital’s Chairman and Chief Executive Officer, said, “This mission will mark the completion of a five-year journey that NASA and our company embarked on in 2008 to create a new medium-class rocket, a sophisticated logistics spacecraft and a world-class launch site at the Wallops Flight Facility.”

Following a successful COTS demonstration mission, Orbital plans to begin regularly scheduled cargo supply missions under its Commercial Resupply Services (CRS) contract with NASA later this year. Orbital is currently scheduled to launch the first of eight CRS missions to the ISS as early as December. All CRS flights will originate from NASA’s Wallops base, which is geographically well suited for ISS missions and can also accommodate launches of scientific, defense and commercial satellites to other orbits.