Inmarsat's Take On The Successful Launch Of Their I-5 F2 Satellite... 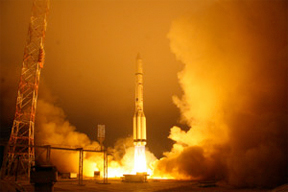 The launch of the Inmarsat-5 F2 Global XPRESS satellite by International Launch Services.

The satellite was correctly acquired by the Inmarsat (Paumalu) ground station at ~18:10 GMT (February 1) and the Inmarsat-5 launch provider, ILS, confirmed a successful spacecraft separation at 04:02hrs GMT (February 2).

Over the coming weeks, the Inmarsat operations team will command the satellite to perform a series of maneuvers to raise Inmarsat-5 F2 to a geo-synchronous elliptical orbit, while towards the end of the month, the satellite will have completed deployment of its solar arrays and reflectors.  This will be followed by the electrical orbit-raising phase, taking the spacecraft to its final geostationary orbit. This is scheduled to be completed by the end of March, ready for the start of payload testing at the beginning of April.

Built by Boeing Satellite Systems International Inc. (“Boeing”) to a proven design (702HP), Inmarsat-5 F2 is part of a US$1.6 billion investment by Inmarsat into the next generation of global mobile broadband communications.

Inmarsat is the owner and commercial operator of the Global Xpress constellation.  The fleet of high throughput satellites will offer a unique combination of seamless global Ka-band coverage from a single operator, consistent higher performance, and the network reliability for which Inmarsat is renowned.

Rupert Pearce, CEO of Inmarsat, said, “The successful launch of our second Inmarsat-5 satellite by Proton is a significant step forward on our journey to deliver the world’s first globally available, high speed mobile broadband service.  Our first GX satellite entered commercial service in July 2014 and has since been delivering an excellent service to our customers in Europe, the Middle East, Africa and Asia. With Inmarsat-5 F3 expected for launch by Proton in the coming months, we are on schedule to achieve full global coverage early in the second half of 2015. This is a great achievement and I would like to pay tribute to the skill and expertise of Inmarsat’s engineering teams and all our employees involved in the design, development, manufacturing, testing and launch.  It is their dedication, alongside the outstanding support we have received from our manufacturing and launch partners—Boeing and ILS—which has helped deliver such a successful outcome.”

The Inmarsat Global Xpress infosite may be accessed at http://www.inmarsat.com/service/global-xpress/