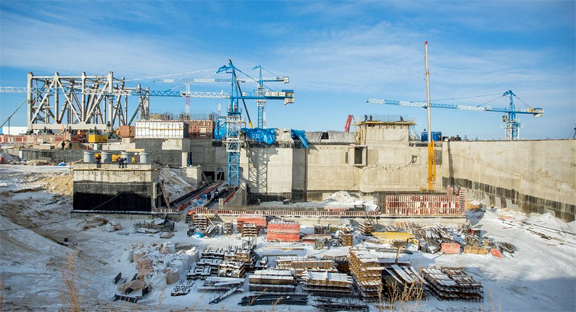 Photo of Vostochny during construction is courtesy of Sputnik/ Igor Ageyenko.

[SatNews] According to a TASS report published on January 30, 2015, Russian Deputy Prime Minister Dmitry Rogozin has stated that, after examining the Vostochny Space Launch Center facilities, that the construction was behind schedule.

"My view after the examination of cosmodrome facilities and talks with representatives of Roscosmos and Spetsstroi (state construction company) is the following: the state of affairs at 'minimum launch' facilities leaves much to be desired. The builders for the present are behind the schedule," Rogozin told a meeting of the commission for control over the country’s most important construction site.

So-called "people’s monitoring" over the construction of the Vostochny spaceport in Russia’s Far East will be organized, Rogozin said. The webcam monitoring will be available online on the Internet websites of the Federal Space Agency (Roscosmos) and the Military-Industrial Commission Collegium.

The construction of a new space center in Russia's Far East, launched in 2012 and initially estimated to cost 400 billion rubles ($7.1 billion at the current exchange rate), is scheduled for completion in July 2015.

The first launch of an unmanned Soyuz rocket is scheduled for December 2015, Rogozin said. Earlier reports indicated that the first of a new generation of rockets using an advanced, more environmentally-friendly engine would carry its first humans into space in 2018. The project has been plagued by missed deadlines and a corruption scandal involving the former head of one of the project's main contractors, arrested on charges of embezzling 1.8 billion rubles (about $32.1 million). Prime Minister Dmitry Medvedev replaced the project's senior manager in early December.

Located in the far eastern Amur Region, Vostochny space center is expected to boost the region's economy and reduce Russia's reliance on neighboring Kazakhstan, whose Baikonur Space Center is on lease to Russia until 2050.