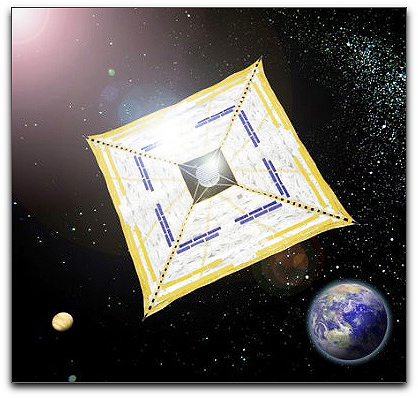 Japan is to launch a "space yacht" propelled by solar particles that bounce off its kite-shaped sails, the country's space agency said on Tuesday. A rocket carrying the Ikaros — or Interplanetary Kite-craft Accelerated by Radiation of the Sun, to give it its full name — will blast off from the Tanegashima space centre in southern Japan on May 18th.

"Ikaros is a 'space yacht' that gets propulsion from the pressure of sunlight particles bouncing off its sail," Yuichi Tsuda, space systems expert at the Japan Aerospace Exploration Agency (JAXA), told journalists. The flexible sails, which are thinner than a human hair, are also equipped with thin-film solar cells to generate electricity to create "a hybrid technology of electricity and pressure," Tsuda said. "Solar sails are the technology that realise space travel without fuel as long as we have sunlight. The availability of electricity would enable us to navigate farther and more effectively in the solar system."

Ikaros, which has cost 1.5 billion yen (16 million dollars) to develop, will be the first use of the technology in deep space, as past experiments have been limited to unfolding its sails in orbits around the Earth, said Tsuda. JAXA plans to control the path of Ikaros by changing its posture and the angle at which sunlight particles bounce off the silver-coloured sail. Ikaros will be a short cylindrical shape when it is released into space and will then extend its 14-metre (46 foot) sail, JAXA said. The name of the spacecraft alludes to Icarus, the figure from Greek mythology who flew too close to the sun and fell into the sea, but Tsuda promised that "this Ikaros will not fly into the sun." The same rocket will also launch Japan's first satellite bound for Venus, called the Akatsuki, or PLANET-C, which will work closely with Venus Express, a satellite sent earlier by the European Space Agency. (Source: FoxNews.com)