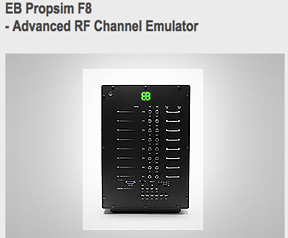 EB Propsim F8 infopage link...
The EB Propsim F8 ASO is designed specifically for the creation of realistic radio channel models for airborne or space radio communications, including avionics as well as missile, satellite, and space communications. The newly developed solution allows for longer and more realistic emulation runs than traditional emulations. Developers and system experts can now test the wireless connection at a fraction of the original cost in a laboratory with link emulations based on accurate pre-calculated channel scenarios. Numerous aviation and military customers have been using the EB Propsim ASO solution for recreating environments in the laboratory to test and verify the performance of communications systems during the critical stages of launch, flight, space station docking procedures and landing of a spacecraft, as well as in mid-air communication and flight navigation. This way the functionality of critical communication systems prior to the launch can be ensured with extreme accuracy prior to field testing.