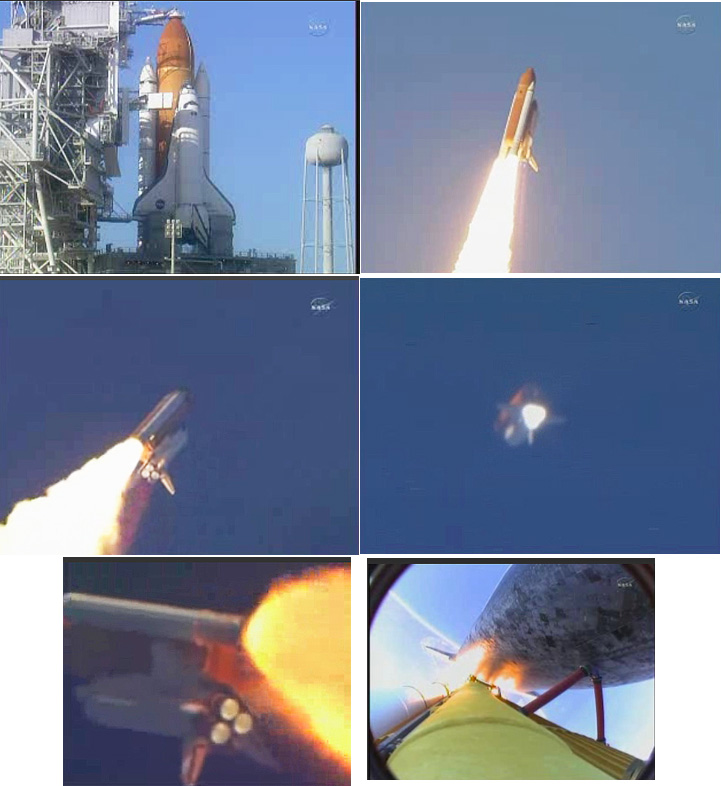 The arm holding the "beanie cap" over the top of the tank rotated away from the shuttle and the shuttle's three main engines ignited six seconds before launch. It will take Discovery 8 1/2 minutes to reach a speed of 17,500 mph and achieve orbit. The photo below shows the crew of STS-133 just before they climbed inside the Astrovan to go to the launch pad. The astronauts making today's flight are, from left, Mission Specialists Nicole Stott, Michael Barratt, Alvin Drew, Steve Bowen, Pilot Eric Boe and Commander Steve Lindsey. During space shuttle Discovery's final spaceflight, the STS-133 crew members will take important spare parts to the International Space Station along with the Express Logistics Carrier-4. 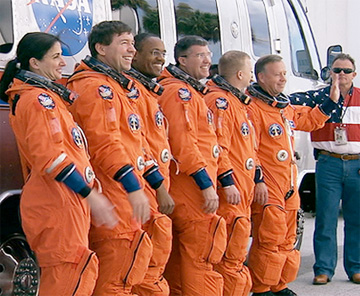 
The STS-133 mission is delivering the Permanent Multipurpose Module (PMM), a facility created from the Multi-Purpose Logistics Module named Leonardo. The module can support microgravity experiments in areas such as fluid physics, materials science, biology and biotechnology. Inside the PMM is Robonaut 2, a dextrous robot that will become a permanent resident of the station. Discovery also is carrying critical spare components to the space station and the Express Logistics Carrier 4, an external platform that holds large equipment. The shuttle crew is scheduled to dock to the station at 2:16 p.m. on Saturday, Feb. 26. The mission's two spacewalks will focus on outfitting the station and storing spare components outside the complex. After completing the 11-day flight, the shuttle's first landing opportunity at Kennedy is scheduled for 12:44 p.m. on Monday, March 7. STS-133 is the 133rd shuttle flight, the 39th flight for Discovery and the 35th shuttle mission dedicated to station assembly and maintenance.