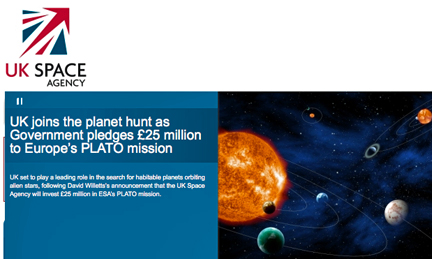 [SatNews] The Government of the United Kingdom (UK) has released two new policies that will shape the future of the country’s growing space industry.

The Government Response to the Space Innovation and Growth Strategy (IGS) Action Plan 2014 – 2030 and the National Space Security Policy (NSSP) set out plans to achieve a 40 billion pound UK space industry by 2030 and a coherent approach to protecting the UK’s space assets.

Minister for Universities and Science, David Willetts, said, “The space sector continues to thrive, and is one of our eight Great Technologies with the potential to propel UK growth. Space industries already support 95,000 full time jobs and generate £9.1 billion for the economy each year, and our response to the Growth Action Plan shows our commitment to secure its future growth and realize ambitions to develop a viable UK space port for commercial space flight.”

The Government Response to the Space IGS Action Plan

The Government has broadly welcomed all of the suggestions made in the IGS and in addition to committing stronger support for export and agreeing further work to improve regulatory framework for space activity, the response also incorporates measures to create and sustain new business in related markets, including the development of a vibrant regional SME community spread across the UK. Actions emerging from the IGS include:

The National Space Security Policy sets out a coherent approach to the UK’s space security interests and outlines measures to make the United Kingdom more resilient to the risk of disruption to space services and capabilities, enhance our national security interests through space, promote a safe and more secure space environment, and enable industry and academia to exploit science and grasp commercial opportunities.

Minister for Defence Equipment, Support and Technology, Philip Dunne, said, "This first space security policy document highlights the right challenges and brings together the right people, blending expertise from Whitehall, from industry, from academia to ensure the UK’s access to the space services we need. This policy is about galvanising our skills, our resources and our raw talent to promote resilience to the risks of operating in space—in both the civilian and military spheres.”

In implementing the National Space Security Policy, some of the early priorities will include mapping our dependency on space across government, critical infrastructure and key industrial sectors and assessing the extent of resilience in each of these fields. There will also be collaboration across government and with national and international partners to share capability where it is possible to do so, particularly in the fields of tracking space debris and near Earth objects.

A link to the reports may be accessed via https://db.tt/tBJgLosR