Boeing's Nomination for Election to Board of Directors ... She Was the First Female Governor of Her State

Perhaps the next step after her career of U.S. ambassador to the United Nations, the first female governor of South Carolina, and a three-term legislator in the South Carolina House of Representatives will be as director of the Boeing Company. 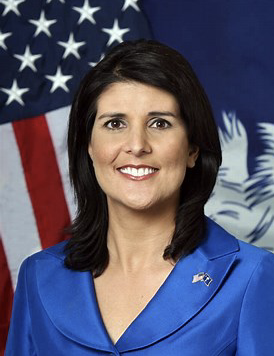 The Boeing Company [NYSE: BA] board of directors has nominated Nikki Randhawa Haley to be elected as a director at the company's annual meeting of shareholders on April 29.

Boeing Chairman, President and Chief Executive Officer Dennis Muilenburg said that Ambassador Haley brings to Boeing an outstanding record of achievement in government, industry partnership, and successfully driving economic prosperity for communities in America and around the world. Boeing will benefit greatly from her broad perspectives and combined diplomatic, government and business experience to help achieve our aspiration to be the best in aerospace and a global industrial champion.

Ambassador Haley, 47, graduated from Clemson University with a bachelor's degree in accounting. She was first elected to the South Carolina House of Representatives in 2004, serving three terms before being elected Governor of the state between 2011 and 2017. Haley was appointed U.S. ambassador to the United Nations by President Trump in January 2017, serving until December 2018.

Ambassador Haley stated that it's an honor to have the opportunity to contribute to Boeing's continued success as a cutting edge industry leader and a great American company. Not only is Boeing the largest aerospace company in the world and America's biggest exporter, it also understands the importance of teamwork and building community through its network of suppliers in all 50 states and around the world.