[SatNews] This team returned to their home base last Saturday after their project was successfully completed...

The much-awaited nano satellite called Jugnu, which was developed by a team of faculty members and students of IIT-Kanpur, India, was launched into space from Satish Dhawan Space Centre at Sriharikota on October 12th.The team Jugnu, which had been camping in ISRO's center in Bangalore after the successful launch of the nano-satellite, returned to their campus on Saturday. The team members shared their ISRO (Indian Space Research Organization) with other students. Shantanu Agarwal, the student team head of Jugnu, and other team members had been camping in Bangalore to gain experience in tracking and monitoring the satellite at the ISRO center. Though half the team members had returned to IIT-Kanpur after the successful launch of Jugnu, a selected number of team members remained at the center to complete their observations. The team said its biggest achievement was that the satellite was built indigenousl, under the leadership of Professor N.S. Vyas of the mechanical engineering department of IIT-Kanpur. The team members were all informed that the nanosatellite had been successfully been sending images, the clarity of which had also improved. (Source: The Times of India.) 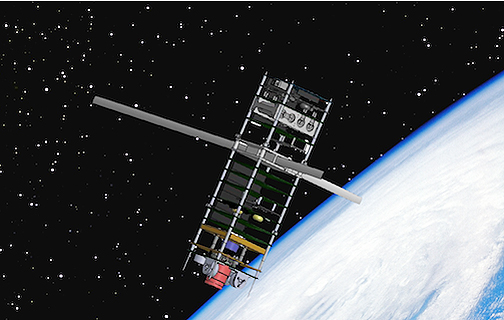 Artistic rendition of the Jugnu nanosatellite