China... The Second In The Series (Spacecraft)

[SatNews] The next docking attempt is set for today by China...

The combination of China's unmanned spacecraft Shenzhou VIII and its space lab module Tiangong-1 successfully adjusted their positions on Sunday night and are ready for the second docking, according to the operation's control center. The adjusting started at 22:37 Beijing Time on Sunday in the orbit of about 343km above the Earth, more than 10 days and 20 hours after the first docking on November 3rd, said Ma Yongping, vice-director of the Beijing Aerospace Control Center. Ma confirmed that the combination of Shenzhou and Tiangong is in good condition and ready for their second docking based on the data received. The separating and re-docking would last about 30 minutes, Ma added, giving no further details.

Previous press release indicated that the second docking would be conducted on Monday "at an appropriate time" and Shenzhou VIII is scheduled to return to Earth on the evening of November 17th. "We've simulated 1,101 dockings and 647 separatings on the ground and the first docking precisely fit into our simulation", said Tao Jianzhong, a research fellow with the Shanghai Academy Spaceflight Technology and an expert on docking simulation. The docking system, developed by Chinese, is compatible with the docking mechanism and structure used on the International Space Station, the Soyuz spaceship and space shuttles, Tao noted, adding that future international cooperations in space project would be convenient in light of that.

On an earlier occasion, the country's manned space program spokeswoman Wu Ping told a press conference that China's spacecraft would conduct two more space docking missions in 2012 and begin to build a space lab and space station after that, with its first manned space station to be put in place around 2020. (Source: China Daily) 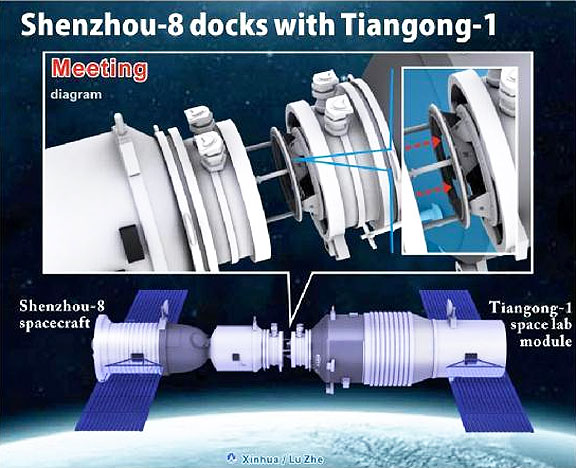