[SatNews] Another milestone in the development of ESA's Gaia spacecraft has been passed with the successful conclusion of two parallel test programs during October. 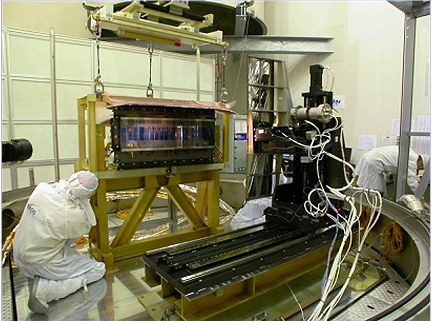 This photograph shows the Gaia focal plane assembly (FPA) engineering model (EM) being prepared for testing in the vacuum chamber at Astrium, Toulouse, France. Photo is courtesy of Astrium.
These tests demonstrated that Gaia's focal plane assembly (FPA) - the 'eyes' of the spacecraft - is structurally and functionally fit for flight. Gaia has been designed to map the entire sky with unprecedented accuracy. Over its 5-year mission, it will repeatedly observe 1 thousand million stars in order to pinpoint their positions and brightness. This will be made possible by using two medium-sized telescopes to direct starlight through a focal plane assembly fitted with large CCD detectors. In order to ensure that this key part of the spacecraft's optical system is capable of functioning properly, an engineering model of the FPA underwent a series of electrical and functional tests in a vacuum chamber at the premises of Astrium in Toulouse. These involved passing an optical image of a star pattern across one row of the focal plane. As each stellar image passed across each of the 16 CCDs, it was detected, confirmed and tracked as a star by the video processing unit (VPU) – the 'brain' of Gaia. The VPU created small 'windows' around each star which 'remembered' its location in the sky image. The windowing of the confirmed stars is a key aspect of Gaia's operations since it enables the data to be automatically discarded from any parts of the sky image that are lacking recognised stars. Without this intelligent software processing, Gaia would be swamped by the vast amount of data it records and sends back to Earth.