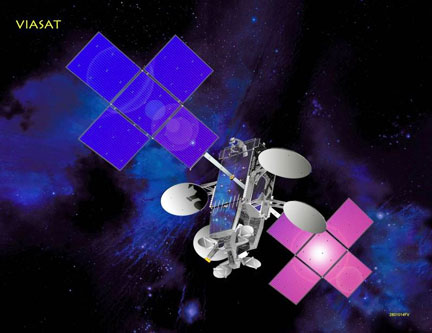 ViaSat-1 satellite
[SatNews] From MOU to deployment for airborne comms...

ViaSat Inc. (Nasdaq:VSAT) and JetBlue Airways (Nasdaq: JBLU) have reached a definitive agreement to deploy the first Ka-band commercial aviation broadband network using ViaSat-1, the world’s highest capacity Ka-band satellite. The agreement formalizes the memorandum of understanding, entered into last September, in which the companies announced their intention to create the industry’s best in-flight broadband for commercial aviation, using ViaSat’s innovative Ka-band satellite technology. Ka-band has the ability to offer higher transmission speeds, more bandwidth for each customer, and more attractive airtime pricing than other high-speed in-flight Internet access alternatives. The agreement includes an order valued at over $30 million for Ka-band airborne terminals and services to outfit the JetBlue fleet of more than 170 aircraft. “Over the past few months we have worked closely with JetBlue and LiveTV to finalize a user-friendly and scalable satellite network for in-flight broadband,” said Mark Dankberg, ViaSat CEO and chairman. “We believe the economics of Ka-band will create an environment that will engage more passengers and offer a broader range of online experiences in the air.”

Wildblue homepage
Under the agreement, ViaSat will provide satellite broadband terminals for installation on the airline’s Airbus A320 and Embraer E190 aircraft along with two-way transmission bandwidth services using the WildBlue satellite broadband network, including the high-capacity ViaSat-1 satellite. JetBlue will be the first airline to receive the ViaSat Ka-band system, and those initial installations are expected to be quickly followed by deployment onboard the Continental Airlines fleet, as announced on March 22 by JetBlue’s wholly-owned subsidiary, LiveTV, and subject to final agreement. Installations are expected to begin in 2012. The system, the first of its kind for commercial aviation, must be certificated by the Federal Aviation Administration. LiveTV will manage the certification, integrate the ViaSat broadband and related components onboard the aircraft, and provide the Wi-Fi enabled services into the cabin. The in-flight Ka-band system being developed for JetBlue is also a key step in ViaSat’s expansion of its successful Yonder® global mobile satellite network to Ka-band in key international markets. ViaSat is adding capacity from regional partners to the network, such as Eutelsat in Europe and Yahsat in the Middle East, which will be accessible to a rapidly growing base of aviation, maritime, and government subscribers now getting high-speed access from Ku-band satellites.