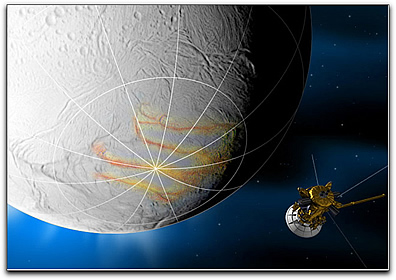 Reports from NASA indicate that the fractures, or "tiger stripes," where icy jets erupt on Saturn's moon Enceladus will be the target of a close flyby by the Cassini spacecraft on Monday, August 11. And they're talking close when it's only 50 kilometers (30 miles) from the surface! Just after the closest approach, all of the spacecraft's cameras that have been covering infrared wavelengths, where temperatures are mapped as well as visible light and ultraviolet, will then focus on the fissures running along the moon's south pole. That is where the jets of icy water vapor emanate and erupt hundreds of miles into space, which have fascinated scientists since their discovery in 2005.

"Our main goal is to get the most detailed images and remote sensing data ever of the geologically active features on Enceladus," said Paul Helfenstein, a Cassini imaging team associate at Cornell University in Ithaca, NY. "From this data we may learn more about how eruptions, tectonics, and seismic activity alter the moon's surface. We will get an unprecedented high-resolution view of the active area immediately following the closest approach."

Seeing inside one of the fissures in high resolution may provide more information on the terrain and depth of the fissures, as well as the size and composition of the ice grains inside. Refined temperature data could help scientists determine if water, in vapor or liquid form, lies close to the surface and better refine their theories on what powers the jets. 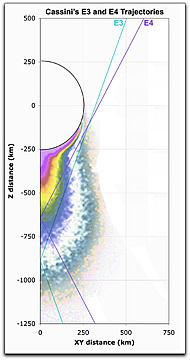 Imaging sequences will capture stereo views of the north polar terrain, and high resolution images of the south polar region will begin shortly after closest approach to Enceladus. The image resolution will be as fine as seven meters per pixel (23 feet) and will cover known active spots on three of the prominent "tiger stripe" fractures.

In addition to mapping the moon's surface in visible light as well as infrared and ultraviolet light, Cassini will help determine the size of the ice grains and distinguish other elements mixed in with the ice, such as oxygen, hydrogen, or organics.

Other instruments will measure the temperatures along the fractures, which happen to be some of the hottest spots on the moon's surface. "We'd like to refine our numbers and see which fracture or stripe is hotter than the rest because these results can offer evidence, one way or the other, for the existence of liquid water as the engine that powers the plumes," said Bonnie Buratti of JPL, team member on Cassini's visual and infrared mapping spectrometer.

Cassini discovered evidence for the geyser-like jets on Enceladus in 2005, finding that the continuous eruptions of ice water create a gigantic halo of ice and gas around Enceladus, which helps supply material to Saturn's E-ring. This marks Cassini's second flyby of Enceladus this year. During Cassini's last flyby of Enceladus in March, the spacecraft snatched up precious samples and tasted comet-like organics inside the little moon. Two more Enceladus flybys are coming up in October, and they may bring the spacecraft even closer to the moon (than the 30 mile pass this time).
Topical Tags :
Agencies
Satellite Operator
Regional Tags :
Global