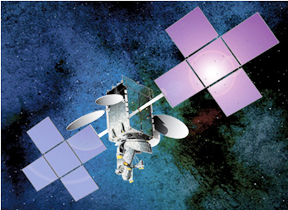 Artistic rendition of the Intelsat 19 satellite.
[SatNews] The spacecraft for the Intelsat-19 mission contracted for launch by Sea Launch AG has been...

...delivered on April 17th to the "Home Port" launch complex in Long Beach, California. The Intelsat 19 communications satellite departed from the satellite manufacturer—Space Systems Loral's facility in Palo Alto, California on April 17, and began its half-day transit. It arrived via surface roads on an oversized transport vehicle with representatives from Intelsat; Space Systems Loral, the satellite provider; and Energia Logistics Ltd., Sea Launch AG's prime contractor, on hand to receive the spacecraft and its associated support equipment. Following unloading, the satellite and equipment were delivered to the clean room of the Payload Processing Facility within the 16 acre facility, where mission operations and integration efforts are now underway. The launch of the Intelsat 19 satellite is scheduled for the late May timeframe. Intelsat 19 will be located at 166 degrees East longitude as part of Intelsat's on-going fleet investment program. It replaces Intelsat 8, a leading video neighborhood providing distribution to cable head ends across the Asia-Pacific region and reaching more than 37 million payTV subscribers around the Pacific Rim.