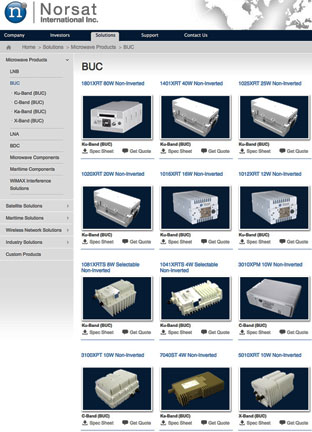 Norsat BUC infopage link
[SatNews] Norsat International Inc. (“Norsat") (TSX: NII and OTC BB: NSATF) has announced that one of its Ka-bBand BUCs was recently used in an antimatter study called the ALPHA (Antihydrogen Laser Physics Apparatus) experiment at the CERN Laboratory located near Geneva, Switzerland.
=
ALPHA is an international collaboration consisting of 42 scientists from universities and institutes around the world, with 15 members from Canada, of which nine are based in the Vancouver area at TRIUMF, University of British Columbia and Simon Fraser University. The researchers in this study have, for the first time, caged antimatter atoms and kept them long enough to be studied by scientific instruments. Specific to Norsat’s BUC, the researchers are currently working on a method to find out what color light the antihydrogen shines when it is hit with microwaves.

In a letter signed by four members of the collaboration, the researchers said, “The Norsat unit functioned exactly as specified, with the expected gain and a maximum power level of 5 watts, with the correct frequency shift (measured directly) and at the expected DC power drain. It was also determined that the gain of the unit was insensitive to magnetic fields, to at least 100 gauss, the maximum field tried (this was an important, but non-standard property of the unit, because of the relatively large fringing fields of the experiment). We would like to express our sincere thanks to Norsat for their response to our urgent request for help, a response that was highly professional, technically superior, and extremely helpful.”

Dr. Amiee Chan, President and CEO of Norsat, said, “It is quite refreshing to learn that one of our BUCs has been utilized in an antimatter study in the prestigious CERN Laboratory, which shows the reliability of our products, even in a research setting like this one which requires the utmost precision. The unit provided to ALPHA was a pre-production model and we look forward to offering the BUC commercially early in the new year.”