Airbus Defence and Space has signed a contract with the European Space Agency (ESA) to build that company's next Earth Explorer mission, the Biomass satellite, which is due to launch in 2021 and will measure forest biomass to assess terrestrial carbon stocks and fluxes for five years. 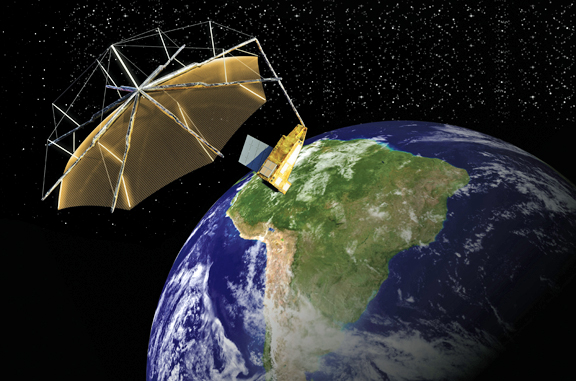 Artistic rendition of the Biomass satellite. Image is courtesy of Airbus Defence and Space.

The spacecraft will carry the first space-borne P-band synthetic aperture radar to deliver exceptionally accurate maps of tropical, temperate and boreal forest biomass that are not obtainable by ground measurement techniques. The mission will collect frequent information on global forests to determine the distribution of above-ground biomass in these forests and measure annual changes. The five year mission will witness at least eight growth cycles in the worlds’ forests.

By using a P-band synthetic-aperture radar, the mission will use all-weather imaging from space to estimate forest biomass. Biomass will also be able to measure paleo aquifers in desert regions to find new water sources in arid regions as well as contribute to observations of ice sheet dynamics, subsurface geology and forest topography. Because Biomass will see through the forest canopy to the ground, terrain height maps will be provided, improving current Digital Elevation Models in densely forested areas. Biomass data will also support REDD+, a UN climate change initiative aimed at reducing emissions due to deforestation, by systematically monitoring forests in vulnerable areas with no need for ground intervention.

The spacecraft will be equipped with a large 12 meter deployable antenna. Such reflectors have been used on four previous Airbus Defence and Space telecommunications satellites with excellent performance at frequencies much higher than P-band. The radar instrument, to be built in Friedrichshafen (Germany), is based on the long-time heritage of Airbus Defence and Space in space borne SAR instruments given by successful missions like Sentinel-1, TerraSAR-X/TanDEM-X and Envisat.

The Biomass mission also makes use of the AstroBus platform line developed by Airbus Defence and Space where the avionics and platform are based on a standard but customizable design that covers a large variety of LEO applications and can be tailored to customer requirements. Biomass will be built using the AstroBus-Medium platform embedding the AS250 avionics. The Astrobus Platform Line has been used, notably, on the following missions: SPOT6/7, KazEOSat-1, Ingenio and Sentinel-5 Precursor.