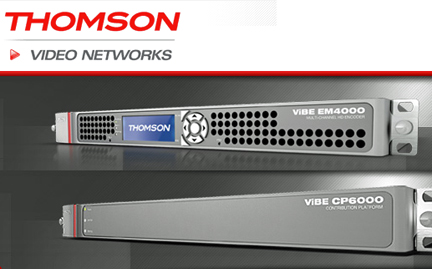 The ViBE EM4000 is the first premium encoder offering a density of eight HD MPEG-4 AVC channels in a 1-RU chassis, making it ideal for a wide range of broadcast operations including satellite, terrestrial, cable, and IP television. Previously, comparable functionality to support eight channels would have required two quad channel encoders and one multiplexer, occupying 3 RU. The ViBE EM4000 saves rack space and power (consuming less than 65W per video channel), as well as allows for greater flexibility in 8+8 channel architectures by enabling operators to change the configuration of a full transponder instantly. With the ability to encode HD or SD channels in MPEG-4 AVC or MPEG-2, the system offers at least 20 percent in performance improvements for MPEG-4 AVC by adding another channel per multiplex or transponder. Other new enhancements to the ViBE EM4000 include compressed input to enable re-encoding, as well as built-in automatic loudness control to fulfill the requirements of the U.S. CALM act.

Designed for contribution and primary distribution applications, the ViBE CP6000 provides eight encoding or decoding channels in a single RU, with four hot-swappable slots for easy operation and fast upgrades in the field. The system offers encoding for channels ranging from MPEG-2 SD 420 up to MPEG-4 4:2:2 10-bit. In a typical contribution scenario such as a sports event with three cameras, operators previously had to deploy three separate encoders and a decoder for the return channel — but the ViBE CP6000 provides the same functionality in a single unit, with the capability to extend the system to support up to six cameras and two return paths. In addition to the increased encoding and decoding density, the ViBE CP6000 now features a new front panel with LCD and keyboard, as well as an additional ASI input and output interface.