[SatNews] In partnership with MacDonald, Dettwiler and Associates Ltd. (MDA) and the National Aeronautics and Space Administration (NASA), the Canadian Space Agency (CSA) is advancing Canada’s leadership in the niche technologies of Light Detection and Ranging systems (Lidar) through Canada’s first international mission to return a sample from an asteroid to Earth. 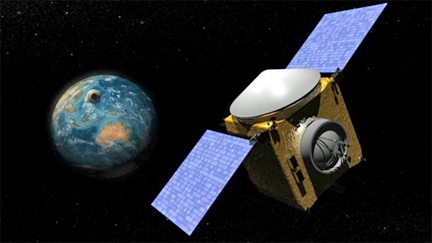 Artistic rendition of the OSIRIS-REx satellite.

The USâ€‘led Origins-Spectral Interpretation-Resource Identification-Security-Regolith Explorer (OSIRIS-REx) mission will study Bennu, an asteroid that has the potential to impact the Earth in the late 2100s. Canada’s contribution to the mission is the OSIRIS-REx Laser Altimeter (OLA), a sophisticated laser-based mapping system to be manufactured, assembled and tested by MDA and Optech. OLA will be used to create unprecedented 3D maps of Bennu to help the mission team select a site from which to collect a sample. In exchange for OLA, the CSA will own four percent of the total returned sample, providing the Canadian scientific community with its first-ever direct access to a returned asteroid sample as well as strengthening the CSA's international partnership with NASA.

The Canadian Space Agency's infosite may accessed via http://www.asc-csa.gc.ca/