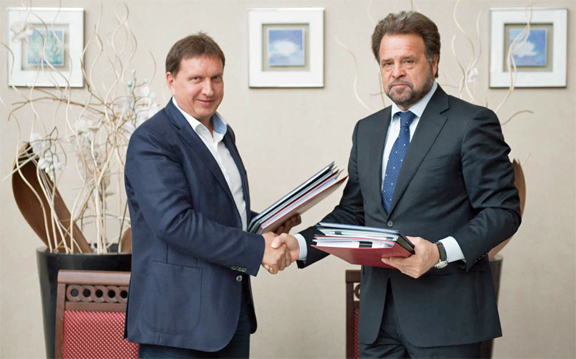 Working together, the two companies intend to use more efficiently the resources they have in order to design such systems. The plan is (i) to develop jointly the technical requirements regarding prospective systems of satellite-supported communications and broadcasting, including those for RSCC, (ii) to assess feasibility of applying new requirements to future communications and broadcasting satellites using the R&D and production potential of Russian space industry, and also (iii) draft proposals regarding the use of prospective domestic satellite launch systems.

Among those contributing to the development of new spacecraft will be Energia specialists who have attended training programs at Airbus D&S under the Express-series project.

“I am convinced that our joint efforts will make it possible to expedite implementation of state-of-the-art processes and standards to ensure appropriate quality and reliability of satellite-supported communications services. Our cooperation will serve the objective of further development of Russia’s infrastructure of satellite communications and broadcasting”, said Energia President, Vladimir Solntsev, following the signing ceremony.

For his part, Yuri Prokhorov, RSCC Director-General, said, “The agreement we have signed is called upon to spur implementation of the 2016-1025 program to develop the domestic orbital constellation of civilian communications and broadcasting satellites involving Russia’s leading space industry enterprises that have the requisite knowhow and unique competencies in the area of space hardware.”