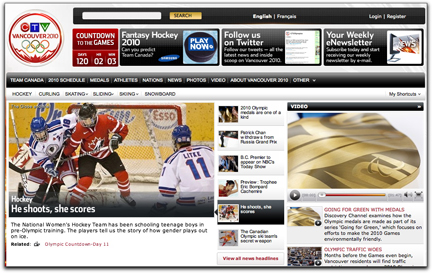 Canada's Olympic Broadcast Media Consortium announced it has selected Harris Corporation to deliver an end-to-end HD broadcast solution for the Consortium's suite of assets during its coverage of the Vancouver 2010 Olympic Winter Games.

The Harris ONE™ solution features a variety of Harris graphics, servers and editing, networking, processing, branding and test and measurement equipment. The system brings together highly integrated products that enable advanced media workflows and provides the Consortium with the highest quality broadcast technology for its delivery of Olympic Games coverage like never before. The Harris package for the Consortium's coverage of the 2010 Winter Games will include NEXIO AMP™ advanced media platforms and NewsForce™ HD/SD production platforms, which will be used to build video clips for news and other programs. Harris NetVX™ video networking systems and Inscriber® G7™ integrated SD/HD broadcast graphics are also central to the system. A variety of fixed and handheld Harris Videotek® test and measurement solutions will be used to monitor video and audio signals live from the venues, assuring signal integrity and compliance with national broadcast standards.

Harris is also supporting the Consortium's online coverage of Vancouver 2010 with a backup control solution for FTP file transfer during digital coverage of the Games on CTVOlympics.ca and RDSolympiques.ca. The system is comprised of NEXIO Remote™ software, which monitors and controls channels on NEXIO® servers over a local area network, and the NEXIO PlayList™ event-sequencing application, which enables clips to be selected from the NEXIO database and arranged in any order for frame-accurate transmission.

In addition to its Toronto headquarters, CTV currently has Harris NEXIO servers and Velocity™ editing solutions at its Ottawa, Montreal, Winnipeg, Halifax, Edmonton, and Calgary locations. CTV also uses NEXIO and Velocity solutions for its broadcast news operations at BNN, TSN and RDS.