[SatNews] Data flowing from a new generation of instruments onboard the Suomi NPP satellite, a joint NASA/NOAA mission, are being used...

...in NOAA’s global numerical weather forecast system a record seven months after launch, nearly three times faster than previous missions. After a rigorous and accelerated evaluation period, meteorologists began using the new data in operational weather models on May 22, 2012. These models are the foundation for all public and private weather forecasts in the United States.

The Suomi NPP polar-orbiting satellite circles the Earth every 102 minutes, flying 512 miles above the surface, capturing data from the land, oceans and atmosphere. It carries five instruments, including the Advanced Technology Microwave Sounder (ATMS), which captures atmospheric temperature and water vapor information used to assess the atmosphere and predict weather. 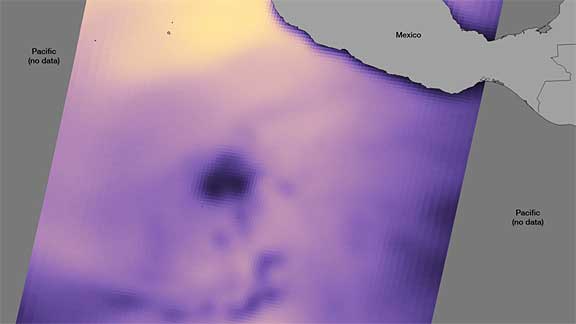 Peering inside Tropical Storm Aletta: Suomi NPP flew over Aletta on May 15. The ATMS sensor can detect subtle differences in moisture, allowing it to "see" through cloud tops. In this image, areas of higher brightness temperature correspond with areas of high moisture in the atmosphere. The low moisture area associated with the center of circulation (which may later form into an eye) can be seen as the dark circular feature. Credit: NOAA

“It takes tremendous effort to ensure data from a new satellite are accurate and ready to be used in advanced numerical weather models. Reaching this milestone clearly demonstrates the effectiveness of the partnership between NOAA and NASA and also speaks to the urgency both agencies have for getting these data into NOAA’s weather models to enhance our forecasts,” said Kathryn Sullivan, Ph.D., NOAA deputy administrator. "This data stream from Suomi NPP ensures NOAA will continue to provide life-saving forecasts. This is welcome news after the devastating weather events of 2011, and as the United States comes closer to becoming a Weather Ready Nation.” 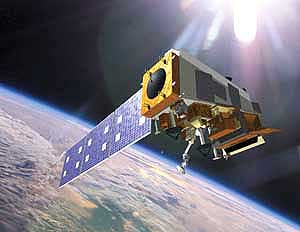 Artist rendering of the Suomi National Polar-orbiting Partnership satellite (NPP), which NASA launched on October 28, 2011 from Vandenberg Air Force Base in California. (Credit: NOAA)
Along with the ATMS, another Suomi NPP instrument, the Cross-track Infrared Sounder (CrIS), is producing higher spatial and vertical resolution data about the atmospheric temperature and water vapor which, when fully operational, will improve NOAA’s weather prediction models for both short and long-term forecasts. In addition to the ATMS and CrIS, three other instruments (the Visible Infrared Imaging radiometer Suite (VIIRS), the Ozone Mapping and Profiler Suite (OMPS), and the Clouds and the Earth’s Radiant Energy System (CERES) are flying on Suomi NPP and are performing well.

ATMS also benefits NOAA’s hurricane forecasters. When ATMS looks into the eye of a hurricane, it will help provide a clearer picture of the hurricane's warm core and the intensity of its rainfall. Additionally, CrIS will provide more accurate data to the global observing system with the potential to improve prediction for hurricanes and other devastating weather events. NOAA officials credit the accelerated ATMS data flow to a focused commitment and unprecedented science partnerships within NOAA and through the NASA-NOAA-NSF-Department of Defense Joint Center for Satellite Data Assimilation (JCSDA) that sped the development of software used in the advanced models. The JCSDA, established in 2001, was created to speed up the time it takes for data from a newly launched satellite to be used operationally in forecasts. NASA provided the ATMS instrument.

The Suomi NPP mission is the bridge between NOAA’s Polar-orbiting Operational Environmental Satellite (POES) and NASA’s Earth Observing System satellites to the next-generation Joint Polar Satellite System (JPSS), which NOAA will operate. The JPSS program is now operating Suomi NPP, which is the first spacecraft in the JPSS series. The second in the series, JPSS-1, is on track to launch in 2017. NOAA’s mission is to understand and predict changes in the Earth's environment, from the depths of the ocean to the surface of the sun, and to conserve and manage our coastal and marine resources.