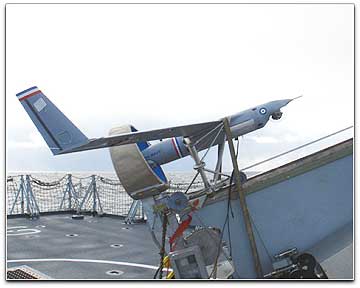 From The Enterprise (White Salmon, Washington), written by Jesse Burkhardt, comes the story of how local company Insitu's "ScanEagle" drone aircraft contributed to the successful military operation on April 12th that freed American ship captain Richard Phillips who was being held hostage by Somali pirates and then enduring the ensuring four-day standoff.

Insitu officials followed the incident closely. "We know the ships we're deployed on," said Steve Nordlund, Insitu's vice president/business development. "When we heard the Bainbridge was on the scene, we knew we had a chance of being in the operation." The Bainbridge employed the Company's ScanEagle technology to provide around the clock observation of the lifeboat.

"The ScanEagle is not an airplane, it's more of a flying camera," Nordlund said. "The airplane is a facilitator to get to our product: We're known for very good imagery. The ScanEagle provides daytime and nighttime imagery, and long endurance. It's not unusual for the ScanEagle to go on 16-hour missions." Then, on the evening of April 12th, U.S. Navy SEALs were able to individually target and kill the three pirates holding Phillips, who was not injured. After his rescue, Phillips praised not only the Navy SEALs, but also the creators of the highly-specialized surveillance technology that provided a big assist in freeing him from pirates armed with AK-47s. 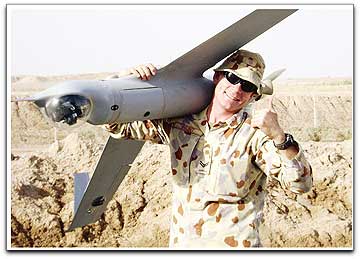 "The Boeing/Insitu team (on board the Bainbridge) did get a chance to meet with Capt. Phillips, and he expressed his appreciation to the entire team," Nordlund said. Knowing Insitu played an important role in the successful rescue of an American hostage was an extraordinary experience for the company's staff.

"There were a lot of Insitu employees walking around the streets of Bingen and White Salmon very proud of our involvement and what we do," Nordlund said. "The overall sense of the employees at Insitu is, we'll all reflect back on this one day and say, `Wow.' There are lots of jobs in life, but how often is there a chance to work on something really cutting edge that makes a difference, or something that is viewed around the world. We're humbled by it. At the same time, we are working with our customers every day and saving lives. This one just happened to make the headlines."

Insitu's ScanEagle was first deployed in 2004. The UAV has a 10-foot wingspan, can fly as high as 20,000 feet, and operates very quietly. The drones are lightweight — 40 pounds for a fully-fueled ScanEagle — and can be launched by what is in effect a slingshot. Nordlund said Insitu technology has been increasingly employed in operations in the Gulf of Aden — off the Horn of Africa — in recent months. "It's a hot spot for pirate activities," Nordlund said. "Even though there are wars in Iraq and Afghanistan, there is another war going on, and our Navy is fighting it."

For Insitu, trying to keep a relatively low profile about a customer like the U.S. Navy — which was using Insitu's products during an incident the whole world was watching — proved to be a daunting task. "We do not discuss customers' operations," Nordlund explained. "But the images we saw on TV were coming from our vehicle, and when you're involved in operations that get the focus this did worldwide, it makes us very proud." Nordlund pointed out that the footage aired on television news programs around the world were supplied to the media by the U.S. Navy, and not by Insitu or its parent company, Boeing, which made Insitu a wholly-owned subsidiary in 2008. The Company recently signed a $30 million contract with the Canadian Army for ScanEagle training and supply.