[SatNews] Privacy expectations and GPS tracking have now been brought to the attention of the highest court in the land... 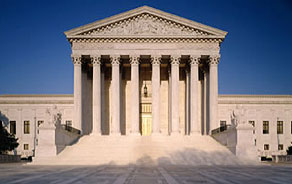 On November 8, 2011, the U.S. Supreme Court heard oral arguments in the case of United States v. Antoine Jones (No. 10-1259), which examines the constitutional privacy rights of American citizens in the face of modern tracking systems based on GPS and other technologies. The case has raised concerns among privacy groups about the warrantless use of GPS to track the movement of citizens for extended periods of time. Conversely, the Department of Justice contends that using GPS to track a vehicle on public roads provides no more information than what police could obtain through visual surveillance.

In this case, the Court will decide two questions:

A decision is not expected until 2012.

In September 2005, the FBI and District of Columbia (D.C.) police attached a hidden GPS device to the vehicle of suspected drug dealer Antoine Jones in a public parking lot. The device recorded and transmitted the vehicle's movements for 28 days. The tracking data showed Jones made frequent visits to a suspected stash house. Jones was ultimately charged with conspiring to distribute narcotics. Jones filed a motion to exclude the GPS data at trial. The police had obtained a federal warrant to install the tracking device on Jones's vehicle in D.C. within 10 days, but they installed it in Maryland, a day after the warrant expired.

The U.S. District Court for the District of Columbia admitted into evidence the GPS data collected while Jones's car was on public streets, but suppressed data from inside his garage. Jones was convicted of conspiracy to distribute cocaine and is now serving a life sentence. Jones appealed the District Court's partial admission of GPS evidence to the U.S. Court of Appeals for the D.C. Circuit. That court ruled that Jones had a reasonable expectation of privacy in the public movements of his vehicle over the course of a month, that the GPS surveillance constituted a search within the meaning of the Fourth Amendment, and that a valid search warrant was required. The Department of Justice petitioned the Supreme Court to review the case, which was accepted on June 27, 2011. (Source: GPS.GOV)