Curtiss-Wright is Preparing for Moon and Mars Missions

Curtiss-Wright’s Defense Solutions division is helping to usher in the next generation of American space travel and preparing to launch NASA astronauts on missions to deep space through the world’s only exploration-class space systems: NASA’s Space Launch System (SLS) rocket, Orion spacecraft and the Exploration Ground Systems that launch these vehicles.

Curtiss-Wright is working with NASA and aerospace leaders to return Americans to the Moon and send astronauts to Mars in the early 2030s. With suppliers in all 50 states, NASA’s journey to deep space is a national effort. 2019 marks the final integration and testing of the rocket and spacecraft leading up to the first integrated launch to the Moon late next year. Aerospace companies across the country are helping to meet NASA’s visionary plan and contribute to America’s unmatched legacy in space. 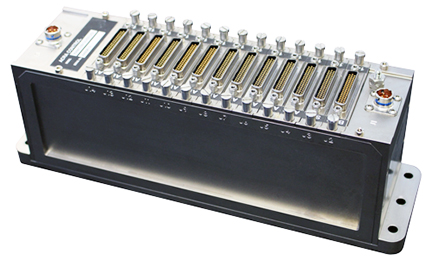 The Smart Backplane Chassis from Curtiss-Wright.

Curtiss-Wright is a leading provider of data acquisition, video and transmission products for space Commercial-Off-The-Shelf (COTS) and radiation tolerant COTS applications. By combining COTS savings with innovative radiation tolerant strategies, trusted systems can be built that meet the needs of the mission at a significantly lower cost.

Lynn Bamford, SVP and GM, Defense Solutions division, said the company is proud to contribute the well proven space data acquisition technology to the success of NASA’s Space Launch System (SLS) rocket, Orion spacecraft and Exploration Ground Systems. Curtiss-Wright’s long legacy as an aviation and aerospace innovator, starting with the firm's founders the Wright Brothers and Glenn Curtiss, makes the company especially pleased to participate in this important and exciting program to return Americans to the moon and later on to Mars.