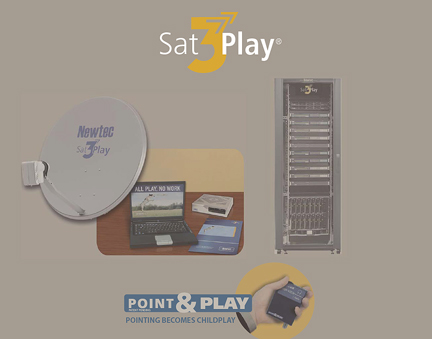 “We have jointly tested and validated the Sat3Play Ka-band platform from Newtec with the objective of proving operational readiness for a rollout of SES Broadband Ka-band services later this year. The upgrade of existing end user terminals and the next generation Ka-band terminals are part of SES strategy to bring its successful broadband service to the next level. The test was very successful and we are pleased with the performance of the equipment. We look forward to the launch of our Ka-band services,” said Patrick Biewer, Managing Director, SES Broadband Services.

During testing, Newtec installed a Sat3Play hub at SES Broadband Services’ premises in Luxembourg, provided several Ka-band terminals working on Astra-1L Ka-band frequencies, and also provided the ability to remotely operate the Hub. Serge Van Herck, CEO of Newtec, said, “The testing has been a clear success. We have now completed the tests and look forward to the operational start of the SES Broadband Ka-band services later this year.” SES Broadband currently offers download speeds up to 10 Mbps and delivers broadband Internet and Voice Over IP (VOIP) services to private households and small businesses. SES will further increase the performance of its service by using additional multiple spot beam Ka-band capacity that will become available onboard its ASTRA 2F, 2E and 2G spacecraft, with the first spacecraft, ASTRA 2F, scheduled for launch later in 2012. At SATELLITE 2012, Newtec is presenting this new High Speed Ku/Ka-band Sat3Play terminal, including a new modem and a new Ka-band interactive LNB unit. The terminal features higher broadband forward and return speeds, the lowest power consumption available on the market and an easy installation tool based on Newtec’s Point&Play® technology. Newtec company information link.