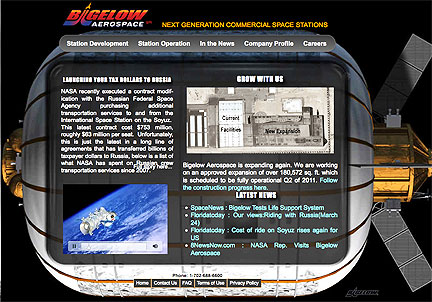 Bigelow Aerospace homepage
[SatNews] The Space Pioneer Award for Space Development will be awarded to this individual at the U.S. Space & Rocket Center...

Robert Bigelow, Founder and President of Bigelow Aerospace, will be the Honored Keynote Speaker at the ISDC Governors' Dinner and Gala to be held in the Davidson Center at the U.S. Space & Rocket Center in Huntsville, Alabama on May 20. Mr. Bigelow founded Bigelow Aerospace, which is noted for developing and launching the first inflatable space habitats. At the Gala, Mr. Bigelow will also receive the National Space Society’s Space Pioneer Award for Space Development for his efforts to advance the technology of space habitats and for the significance they may play in the development of space tourism, industry and exploration.

Bigelow Aerospace took over the Transhab space habitat development program after NASA scrapped it, and effectively reinvented it — developing and successfully launching its prototypes, Genesis I and II, in 2006 and 2007. Limitations on payload volume during launch are one of the major constraints of the NewSpace industry, and the Company’s inflatable concept solves that problem for most in-space habitat applications. The lower launch volume and mass per volume of the inflatables, combined with now imminent launch cost reductions, should soon allow delivery of paying passengers to safe and functional orbiting destinations, such as the Bigelow station planned for operation by 2015. The intended expansion of the space station market to private and international customers by Bigelow Aerospace has already had a transformative effect on how the future of space development is likely to unfold. In addition, inflatable modules will also serve their originally-intended purpose, as crew habitats for human operations beyond Low Earth Orbit.