Up, Down, Left, Right — This New VTOL UAS Solid Candidate For U.S.M.C. 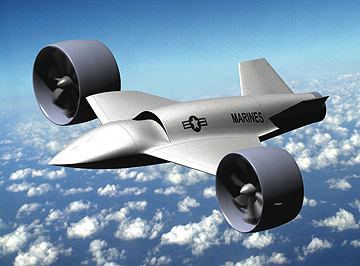 According to the company, the UAV's unique design, combined with the vehicle's high-speed capabilities, makes it an ideal choice for both land and sea-based operations. AD-150's development was initiated due to an increased interest in maritime capable VTOL UAV's by the United States Department of Defense. The vehicle is currently considered a potential candidate for the United States Marine Corps' Tier III VUAS program, in accordance with and which it should be capable of operating alongside the MV-22 Osprey tilt rotor transports and Lockheed Martin’s F-35B Lightning II joint strike fighters in a broad range of expeditionary operations. According to a statement released by the U.S. Navy, the minimum speed required for the qualifying UAV is 200kt (230 mph), although 240kt (276 mph) will be highly preferred – ADFS engineers say AD-150 easily passes this requirement, reportedly reaching maximum speed of 300kt (345 mph).

Among the vehicle's most notable features is ADFS' High Torque Aerial Lift (HTAL) implementation, which, according to the company, maximizes the vehicle's control during hover and transition to forward flight. AD-150 sports a modular mission payload design, with internal bays and external stores located in the vehicle's center of gravity. According to the company, such a versatile payload bay configuration allows the AD-150 to support "the most demanding payload systems and missions." A released AD-150 specifications document states that the vehicle's maximum takeoff weight currently stands on 2,250 lbs, while its payload capacity is 500 lbs. The UAV features a composite airframe, which was constructed using carbon fiber and Kevlar materials – ADFS engineers say the design was fully validated through the use of reputable computational fluid dynamics (CFD). Additional features of the AD-150 include a high-performance Pratt and Whitney Canada PW200 Turboshaft engine, as well as advanced interoperable data links and Ground Control Station (GSC) interfaces. One of the first full-scale models of the AD-150 was on display at the Association for Unmanned Vehicle Systems International's (AUVSI) Unmanned Systems North America exhibition in Washington D.C. on August 7th, 2007.