Japan... Two Are Lofted, One To Eyeball North Korea (Launch)

[SatNews] Japan launched two new satellites on Sunday, one of which was designed to strengthen its...

...monitoring capabilities amid concerns that North Korea may carry out more missile and nuclear tests. A rocket carrying a radar-equipped satellite blasted off from a space centre at Tanegashima in the southwest, the Japan Aerospace Exploration Agency (JAXA) announced. The space agency said the satellite would be used for information-gathering, including data following Japan's 2011 quake and tsunami, but did not mention North Korea by name. The launch was carried out by a H--IIA rocket and the satellite should give Tokyo the ability to detect areas as small as one square meter at night or through cloud cover. The second satellite was designed to test new optical technologies. 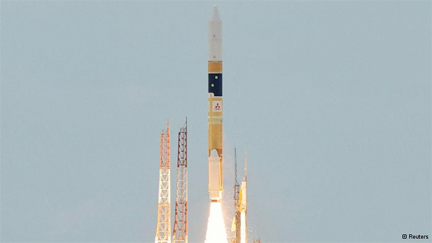 The launch comes after Pyongyang rejected dialogue on its atomic program following tightened UN sanctions for a banned rocket launch. The North's foreign ministry responded angrily to the UN Security Council action saying there would be "no dialogue to discuss denuclearisation" and hinting that a new atomic test could be planned. Japan hopes the satellite launch will enable it to complete a system first devised in the early 1990s as a response to fears about North Korea. From an altitude of several hundred kilometres, the satellite will be able to detect objects on the ground as small as a square metre, including at night and through cloud cover, thanks to its radar.

Tokyo has four operational satellites in space, of which one is equipped with radar. It has used satellites for monitoring and information-gathering since the late 1990s.