Northrop Grumman — Monolithic They May Be, However, MMICs Are Mighty 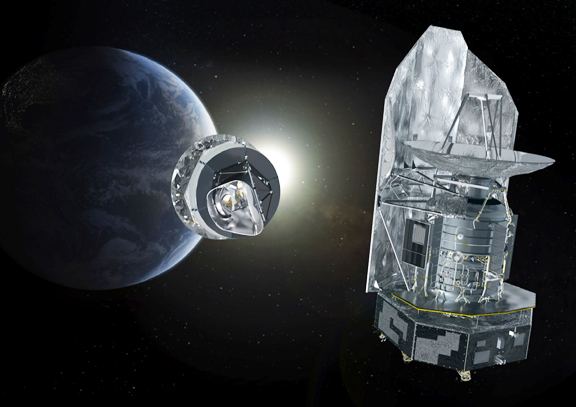 Herschel and Planck use transistors and MMICs developed in the company’s microelectronics facility in Manhattan Beach, Calif. The circuits — designed at NASA, the Jet Propulsion Laboratory, ESA and Northrop Grumman — form the foundation of Herschel’s and Planck’s low-noise amplifiers and switches, as well as Herschel’s terahertz (THz) local oscillator sources. The systems include the lowest noise MMIC-based millimeter wave radiometers and THz multiplier sources ever built.

Herschel, the largest space telescope ever launched with a 3.5-meter (11.5 feet) mirror, observes in the far-infrared and sub-millimeter wavelengths, allowing astronomers to see deep into star-forming regions, galactic centers and planetary systems. Planck, Europe’s first mission to study relic radiation, observes the cosmic background radiation: the radiation released into the universe by the Big Bang itself about 14 billion years ago. Planck will help answer how the universe came to be and how it evolved soon after.

“This work continues Northrop Grumman’s tradition of supplying state-of-the-art microelectronics technology for spacecraft applications, including radiometers for Jason 1, Odin, Cloudsat and the Microwave Limb Sounder program,” said Richard Lai, director of Technology Programs for Northrop Grumman Microelectronics Processes and Products. “Our devices are also used in many ground-based applications around the world, including several ground-based telescopes that use them because of their state-of-the-art low-noise capability and their uniformity.” Jason 1 was launched to monitor global ocean circulation, study the ties between the ocean and the atmosphere, improve global climate forecasts and predictions, and monitor events such as El Niño and ocean eddies. Odin was the first indium phosphide MMIC cryogenic amplifier to fly in space. It was designed to perform detailed studies of the physics and chemistry of the interstellar medium by observing emissions from key objects like giant molecular clouds and nearby galaxies.

The company also supplied microwave amplifiers for the Cloudsat space-based radar that is used to study cloud formation to measure how much ice and water are in the air at various altitudes. The Microwave Limb Sounder in use on NASA’s Aura spacecraft was created to help better understand the processes and parameters vital to global climate change research and environmental policy by observing the chemistry of Earth’s lower stratosphere and upper troposphere.