The Behavior Of Mt. Etna Is Rather Volcanic

Using radar images acquired by ESA satellites from 1992 to 2006, scientists have, for the first time, been able to monitor the long-term behaviour of Mt. Etna, Europe's highest and most active volcano.

This unprecedented time series of Synthetic Aperture Radar (SAR) observations from ESA’s ERS-1, ERS-2 and Envisat satellites provided crucial information for understanding how the volcano’s surface deformed during the rise, storage and eruption of magma. Changes in surface deformation, such as sinking, bulging and rising, are indicators of different stages of volcanic activity, which may result in eruptions. Thus, precise monitoring of a volcano’s surface deformation, or ‘breathing’, could lead to predictions of eruptions. 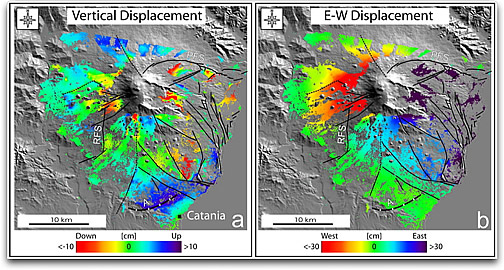 The team was able to determine the deformation of Mt. Etna’s surface over a long period on a scale of centimetres. InSAR involves mathematically combining different radar images acquired from the same point in space at different times to reveal changes that have occurred on the ground between recordings. Based on the deformation measurements retrieved from their InSAR analysis during the 1992-2006 time interval and on the recorded volcanic data, the team distinguished two volcano-tectonic behaviours. "Between 1993 and 2000, Etna inflated with a deformation rate of about 1 cm per year that progressively reduced with time, nearly vanishing between 1998 and 2000. Moreover, several eruptions took place with the lava being erupted (at a relatively low rate) exclusively from the top of the volcano," said Riccardo Lanari from the Istituto per il Rilevamento Elettromagnetico dell’ Ambiente (IREA-CNR) in Naples, Italy.

"Between 2001 and 2005, Etna deflated while erupting lava at a higher rate from its flanks; this occurred along with large displacements of the entire east-flank. We suggest that these two behaviours result from the higher rate of magma stored between 1993 and June 2001, which triggered the emplacement of the dike responsible for the 2001 and 2002-2003 eruptions, destabilising the volcano."

The results of the study show how surface deformation relates to eruptive behaviour over a time span much larger than that of a single eruption. Consequently, the continuity of satellite data is essential for studying and possibly predicting future volcanic eruptions. ESA remains committed to providing continuity to its SAR missions. As part of its Global Monitoring for Environment and Security (GMES) programme, ESA will launch five Sentinel satellites. Sentinel-1, expected to be launched in 2011, will ensure the continuity of SAR data with ERS-2 and Envisat.

Cumulative (a) vertical and (b) east–west deformation maps retrieved by applying the SBAS-InSAR technique to an ERS-Envisat Synthetic Aperture Radar (SAR) dataset relevant to the 1992-2006 time interval, with superimposed main fault systems (black lines) and the anticline structure (A) at the base of Mt. Etna; the results are spatially referenced to the highlighted pixel located in the town of Catania (black box in the lower right corner of Figure (a)).