China... Tiangong Will Be Tardy (Launch) 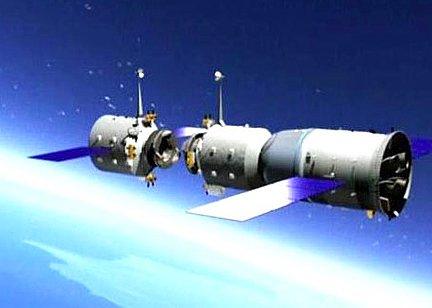 Artistic rendition of China's Tiangong-1
[SatNews] Due to a failed orbit last week, this spacecraft's launch will be delayed...

According to an unnamed source in a position of authority at the Jiuquan Satellite Launch Center, the Chinese unmanned space module, Tiangong 1, will be launched soon. However, because the experimental orbiter SJ-11-04 which was launched last week and failed to enter orbit, the launch of Tiangong 1 has been postponed until early September. Tiangong 1, which means "Heavenly Palace," is the name of the first Chinese unmanned space module. After the launch of this spacecraft, China will then launch the Shenzhou 8, Shenzhou 9 and Shenzhou 10 spacecraft that will dock with the Tiangong 1 to build the first Chinese space laboratory. At present, Tiangong 1 and its carrier, the Long March II-F carrier rocket have been moved to the launch site and are undergoing vertical assembly. (Source: Xinhua News Agency)