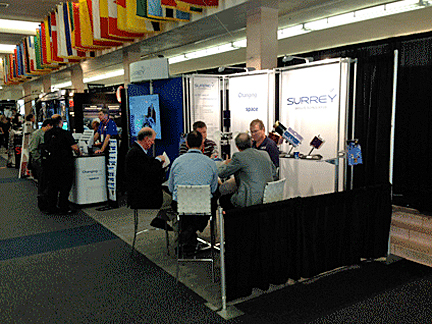 The SSTL booth at the Small Satellite Conference in Logan, Utah.

This growing event is one Surrey Satellite Technologies Ltd. US (SST-US) is proud to be part of as both an exhibitor and a small satellite pioneer. The conference theme highlights the fact that entrepreneurs are increasingly leveraging small satellite technology to bring innovative applications to fruition that wouldn’t have been feasible just a few years ago.

This theme also provided an ideal backdrop for SSTL to discuss their two Orbital Test Bed (OTB) missions that have recently made news. The idea behind these “ride-sharing” satellites is to enable organizations, big and small, to launch newly designed satellite components, experimental subsystems, and payloads into space aboard a flight-proven satellite bus at reduced risk and cost.

Included in the conference proceedings was the SSTL-US paper “The Technology Objectives of the Orbital Test Bed Mission: Using the Hosted Payload Concept to Advance Small Satellite Technologies and Scientific Capabilities,” coauthored by Anita Bernie and Tyler Murphy. This paper discussed the technology objectives of the OTB mission and the relevance of a hosted payload approach for flying U.S. government sensors and commercial payloads to enable the commercialization of small satellite products and technologies. The paper also advanced the capabilities of future small satellite systems, as well as discussed the validity of different mechanisms for creating and exploiting fast-turnaround hosted payload opportunities. 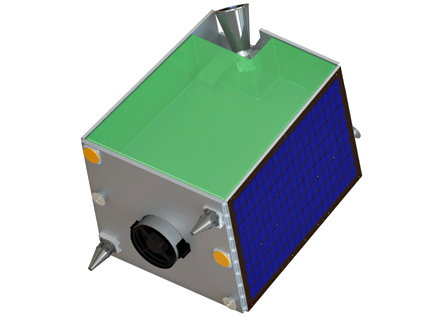 In mid-July of this year, SST-US formally announced the flight manifest of their first OTB satellite, which will carry five demonstration payloads for a range of commercial, government and academic organizations into space aboard a SpaceX Falcon Heavy rocket. With the cost shared among the participants including NASA’s Jet Propulsion Laboratory, U.S. Air Force Research Laboratory, Air Force Academy, University of Colorado, and ourselves, all will get the chance to quickly space-qualify new equipment and gather in-orbit performance data without investing in a dedicated mission.

At the time the OTB manifest was closed, SST-US was still in talks with several additional organizations that had demonstration payloads of their own on the drawing board or under development with no ride into space.The company has officially announced plans for their second test bed mission OTB-2, which is scheduled for launch into LEO in 2016. Similar to OTB, the second test bed mission is based on the SSTL-150 platform.

The company plans to flight test one of their own experimental optical suites on OTB-2, along with the payloads of multiple third parties who will take advantage of a unique opportunity. In addition to the SSTL-US payload, OTB-2 will have a baseline capacity to support payloads up to 50kg and 50W, but the option is available to expand and customize based on customer requirements. OTB-2 will be manufactured at SST-US' Englewood, Colorado, facility.

Looking at OTB from a broader perspective, SST-US believes the OTB missions as the cornerstone of their goal to change the economics of space through small satellite technology, a refrain that is playing well here at the conference in Logan, Utah.