[SatNews] The GOES-13 spacecraft, which had its sounder and imager instruments taken out of service because of...

...technical trouble in late September, returned to full operations on Thursday, October 18, 2012. The trouble stemmed from a motor vibration, which caused a lubricant buildup that obstructed the spinning motion of the filter wheel in the sounder. A team of engineers from NOAA, Boeing and ITT suppressed the vibration, the filter wheel restarted and is running smoothly, with improved performance.

NOAA turned off the two instruments on September 23rd, and immediately configured GOES-15, the West Coast satellite, to provide additional coverage of the eastern United States and part of the Atlantic Ocean. Within a few hours, NOAA activated its on-orbit spare satellite, GOES-14, for full service. As a team of engineers from NOAA, Boeing and ITT continued to pinpoint the cause of the problem, NOAA began moving GOES-14 towards the position where GOES-13 was situated. GOES-14 will return to its earlier status as the on-orbit spare, NOAA officials said. 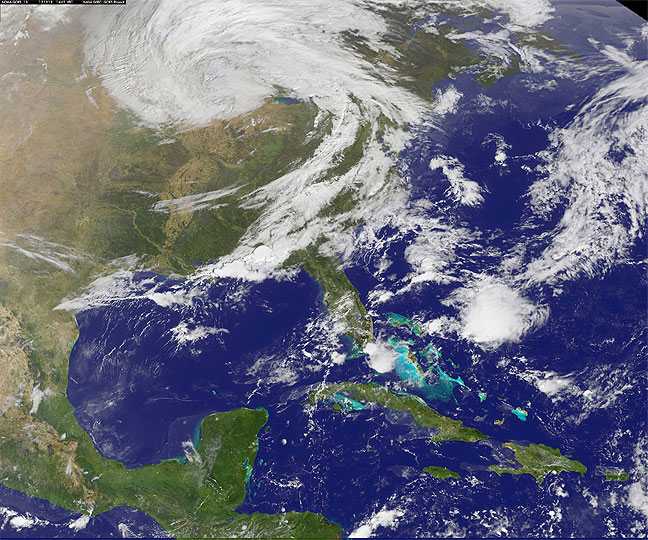 The GOES-13 spacecraft, which had its sounder and imager instruments taken out of service because of technical trouble in late September, has returned to full operations on Thursday, Oct. 18, 2012. This image from GOES-13 was taken at 1445 UTC (10:45 a.m. EDT).

GOES-13 had been NOAA's geostationary satellite, providing coverage of the U.S. East Coast, since April 14, 2010. At all times, NOAA operates two GOES spacecraft 22,300 miles above the Equator, with an additional GOES in orbital storage mode, ready to step in if one of the active satellites experiences trouble. NOAA manages the GOES program, establishes requirements, provides all funding and distributes environmental satellite data for the United States. The NASA GOES Program at NASA's Goddard Space Flight Center in Greenbelt, Maryland, procures and manages the design, development and launch of the satellites for NOAA on a cost reimbursable basis.