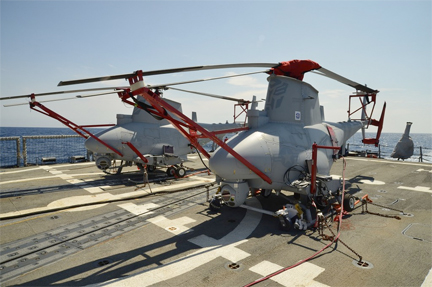 ...more than $71 million to produce six additional next-generation Fire Scout unmanned helicopters. The Fire Scout endurance upgrade, designated the MQ-8C and based on Bell Helicopter's 407, will provide ship commanders with increased range, endurance and payload capacity over the current MQ-8B variant. The Navy plans to purchase a total of 30 aircraft under a rapid development effort. Northrop Grumman is currently under contract to produce 14 Fire Scouts that are scheduled to begin deploying in 2014. Manufacturing and assembly operations of the new Fire Scout variant are well under way across the country, with airframe modifications being made at Bell's facility in Ozark, Alabama, and final assembly being completed at Northrop Grumman's Unmanned Systems Center in Moss Point, Mississippi.