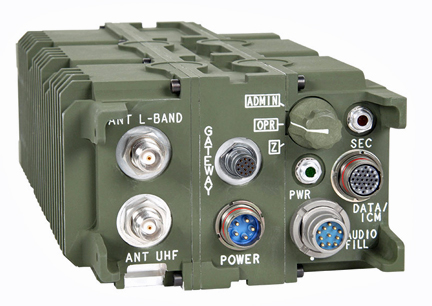 The contract has a potential ceiling of $988 million and also includes five one-year options that can be exercised at the Army’s discretion. The appliqué will host SRW, a waveform developed by Exelis that operates in the UHF and L-band frequency ranges and provides an affordable second channel solution to Single Channel Ground and Airborne Radio Systems (SINCGARS) vehicular radio installations.

The initial Exelis offering on this contract is the SideHat®, a radio specifically developed for the vehicular electromagnetic and physical environment experienced on the battlefield. Exelis, a leader in extending critical networks, designed SideHat to easily integrate with SINCGARS, the primary tactical communications backbone for the U.S. Army with nearly 600,000 fielded. SINCGARS with SideHat and SRW provides a system solution with up to four-channels (2 SRW and 2 VHF). It provides dismounted soldiers the ability to communicate both voice and data to mounted soldiers in vehicles within a larger network.

“The SRW Appliqué will provide the U.S. Army with a cost effective means to add a robust waveform for battlefield communications,” said Nick Bobay, president of the Exelis Night Vision and Communications Solutions division. “As the developer of SRW and the manufacturer of an installed base of nearly 600,000 Army radios, we have the capability to deliver both the performance and value expected from fielding the SRW Appliqué.”