ISRO... INSAT-4B Not Totally Itself (Satellite) 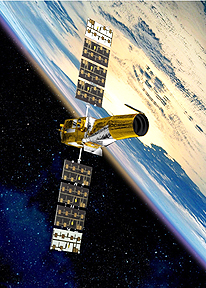 [SatNews] The Indian Space Research Organization (ISRO) has stated that, due to a power supply anomaly in one of its two solar panels, there is a partial non-availability of services on India’s INSAT-4B communication satellite. The INSAT-4B carries a total of 24 communication transponders (12 Ku- and 12 C-band) and has been in operation since March of 2007. On the night of July 7th, the satellite experienced a power supply glitch which led to a switching ‘OFF’ of 50 percent of the transponder capacity (6 Ku- and 6 C-band transponders). An team of experts is studying the possibilities of partial use of some of the transponders that were switched ‘OFF’ and quickly restoring the services.