Arianespace Preps For Sixth Mission With A Star (Launch)

[SatNews] Both payloads are now in French Guiana...

for Arianespace's sixth Ariane 5 mission of 2012 are now in French Guiana following this month's delivery of the Star One C3 relay platform, which will join its EUTELSAT 21B co-passenger on the next heavy-lift flight. 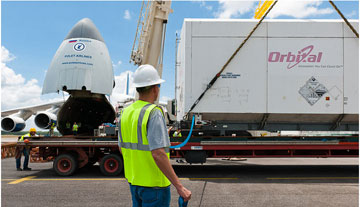 Star One C3 is unloaded from the Antonov An-124 cargo jetliner after its touchdown at Félix Eboué Airport, which is located near French Guiana's capital city of Cayenne.

Star One C3 arrived at Cayenne's Félix Eboué Airport aboard a chartered cargo jetliner for its transfer to the Spaceport where EUTELSAT 21B has been undergoing its own pre-launch preparations since the second week in October.

The Star One C3 spacecraft was built by Orbital Sciences Corporation based on the company's GEOStar™ bus, and carries a hybrid payload to provide C- and Ku-band communications for the South American region. It features a pair of 2.3-meter deployable reflectors and one 1.4-meter Earth deck-mounted antenna, and is designed to generate approximately five kilowatts of payload power over a mission life greater than 15 years.

Star One C3 will be operated by Brazil-based satellite communications service provider Star One S.A. following its launch on Arianespace's upcoming Ariane 5 mission – which is planned for liftoff from the Spaceport on November 9.

It will be orbited along with the EUTELSAT 21B telecommunications spacecraft, which was produced for Europe's Eutelsat Communications by Thales Alenia Space.