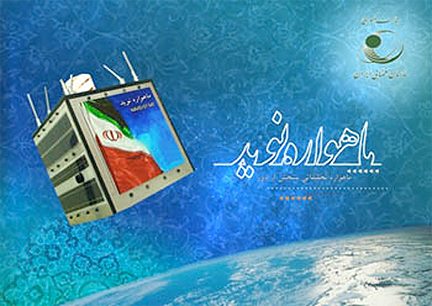 Artistic rendition of Iran's "Promise of Science and Industry" satellite, a 50kg satellite, which launched into orbit on February 3, 2012, via Iran's Safir 1-B rocket.
Image credit: Iranian Space Agency
[SatNews] Iran is apparently poised to launch a new satellite into space on...

...Wednesday (May 23rd), a mission that, if successful, would mark the country's first flight of a spacecraft capable of maneuvering in orbit, experts say. The Union of Concerned Scientists (UCS) announced on Monday that Iran is set to launch a satellite called Fajr (or "Dawn") atop a Safir 1B rocket on a mission to demonstrate the country's first use of a maneuverable spacecraft in orbit. The satellite is likely small as the 30-ton Safir 1B rocket is capable of launching only lightweight payloads into low-flying orbits, the U.S. science-oriented non-profit group stated.

The launch, which is scheduled for the same day Iran meets with United Nations officials in Baghdad to review the country's nuclear program, will go on as planned despite any Western sanctions or pressures, according to sources. Press TV stated the Fajr satellite is a reconnaissance craft designed to observe the Earth from an altitude of 186 miles (300 km) for a year and a half. A successful launch Wednesday would mark Iran's second space mission of 2012. In February, the Iranian Space Agency launched a small Earth-observation satellite in a flight that also used a Safir 1B rocket.

According to UCS Senior Scientist Laura Grego, Iran's Fajr satellite launch has been delayed since October 2011, apparently due to the need for more testing. The satellite is equipped with a cold gas thruster system to maneuver in space. "This maneuver will boost the lifetime for the satellite," Grego wrote in the UCS blog "All Things Nuclear." Iran's previous satellites were able to stay in orbit only a few months before atmospheric drag pulled them out of orbit, but Iran has said Fajr will orbit for a year and a half."

The new satellite is reportedly equipped with an Iranian-built global positioning satellite system that will enable Iranian space officials to track its flight, Grego explained. While the exact intended altitude and mission length of the Fajr satellite is unclear, the spacecraft is apparently designed to snap photos of Earth with a resolution of between 1,650 feet to 3,300 feet (500 to 1,000 meters), she added.

Iran has launched three satellites to date, including its first indigenous satellite, Omid, in 2009. In 2010, the country launched another satellite and a capsule containing turtles, a rat and a worm into space. In 2011, Iran reportedly attempted to launch a live monkey into space, but the rocket failed to reach space. Western critics have expressed some concern over the potential military applications of Iran's rocket program since boosters developed to reach space could also be used as long-range ballistic missiles. Iran has denied such concerns and stated that the country intends to launch a manned mission by 2019.