[SatNews] This is the first implementation of SDR technology in combo with BGAN...

Danish software developer GateHouse has combined Inmarsat’s Broadband Global Area Netwokr (BGAN) satellite communications capability with software-defined radio (SDR) technology to create the first commercially-available SDR implementation of a BGAN terminal. The implementation of the full BGAN embedded software, which includes physical layer, protocol stack and basic application layer, has been designed to support all BGAN terminal classes and to be portable to multiple hardware platforms. GateHouse's existing BGAN protocol stack is already incorporated into a broad range of BGAN terminals from several manufacturers. SDR technology enables a number of waveforms (communication standards) to run on the same hardware platform, allowing rapid changes from one communication standard to another. The BGAN waveform opens a new method of establishing broadband satellite communications on the move, and the application has already been successfully demonstrated using FTP, live video streaming, email and web browsing. It marks a technological breakthrough for BGAN SDR, proving the technology has matured to a point enabling integration in viable solutions.

The BGAN waveform is integrated on a Software Communications Architecture (SCA) version 2.2.2 compliant platform. This is a non-proprietary specification sponsored by the Joint Tactical Radio System (JTRS) programme of the U.S. Department of Defense. The BGAN SDR waveform can run as the sole waveform on a radio or as one of several waveforms on a multimode radio. And it can be integrated with any military-grade SDR capable of transmitting and receiving in the BGAN L-band frequency range (1.5 to 1.6GHz). This means that units can now be deployed with a single multifunctional radio that can be BGAN-enabled almost as easily as changing a channel.

A typical SDR application would be for a warfighter or first responder to achieve connectivity virtually anywhere in the world from a single piece of hardware, thereby saving space, weight and power. Depending on need and location, the user could quickly load different software to change his radio configuration, including:
In addition to re-using hardware platforms and allowing multiple waveforms to coexist on a single radio, the SDR approach also enables considerably easier upgrade of BGAN terminals - for example, for the introduction of new or higher data rates.

“We have been working with the Inmarsat BGAN technology for the past decade, and have launched a portfolio of embedded software products as well as testing solutions which have been used by the majority of BGAN terminal manufacturers to date,” said Tine Pihl Pedersen, Manager of Business Development, GateHouse Satellite Communication. “The BGAN waveform developed in cooperation with Inmarsat leverages all our experience, and enables us to offer the BGAN technology as an added capability to existing and future software defined radios. We have made BGAN accessible for everyone that needs to extend their communication capabilities with a proven satellite communication waveform.” 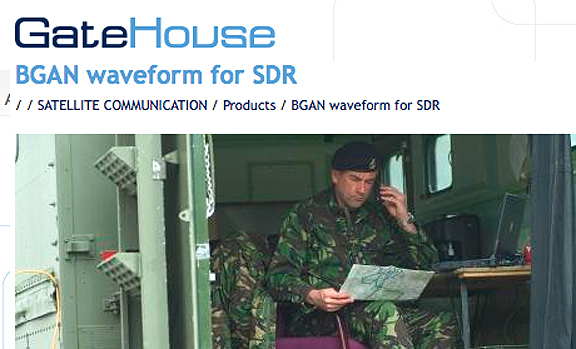