One Down, One To Go, As Old Russian SpySats Turn Into Burned Objects 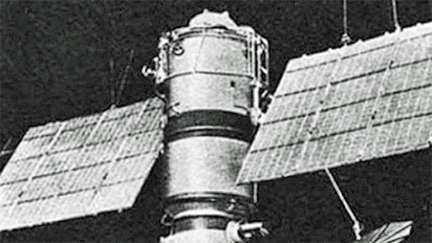 Image of the Kosmos-1441 satellite is courtesy of www.vladtime.ru

[SatNews] The RT news site is reporting that an old Soviet reconnaissance satellite is due to enter and burn up in the Earth’s atmosphere on Saturday, November 8, 2014, while any possible debris is projected to fall into the Pacific Ocean, this according to the Russian Aerospace Defense Force.

“Analysis indicates that fragments of the Kosmos-1441 satellite will leave the near-Earth orbit on November 8, 2014 over the Pacific Ocean. The final date and site where the fragments may crash may change under the influence of external factors,” spokesman for the Russian Space Command Aleksey Zolotukhin told TASS.

Kosmos-1441 is a Soviet military ELINT (Electronic and Signals Intelligence) satellite that was launched from the Plesetsk cosmodrome in 1983 onboard a Vostok rocket. The satellite was a part of the Soviet and then Russian space-based military surveillance system, designed to detect radio-emitting objects, their type and mode of operation, including how active they are. Its one-year active service life is said to have expired in February 1984.

The Aerospace Defense Force specialists maintain stable control and are tracking the spacecraft, which is currently orbiting the Earth at 88 minutes orbit time, 81 degrees inclination, apogee 215 km, perigee 204 km. The agency also confirmed an earlier deorbiting of the Kosmos-1939, and that satellite fell into the waters of the Caribbean Sea, which occurred on October 29th.