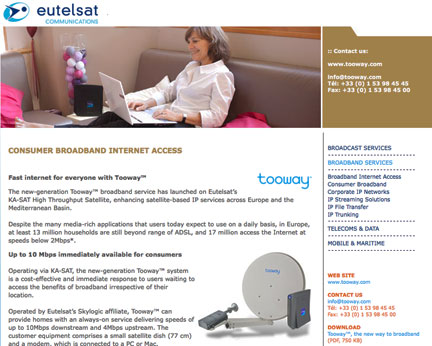 Tooway infopage link
[SatNews] The Company's latest satellite has now entered service... Eutelsat Communications (Euronext Paris: ETL) has announced the commercial entry into service of its KA-SAT High Throughput Satellite, marking the official launch of its new-generation Tooway™ broadband service. Eutelsat's high-capacity all Ka-band system, combining satellite and on-ground infrastructure, opens a new chapter in the market for satellite-based IP services. As a powerful new platform for delivering high-bandwidth services to users beyond range of terrestrial networks, it can deliver cost-effective and competitive solutions that contribute to building inclusive digital economies across Europe and the Mediterranean Basin. 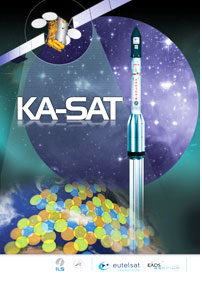 The new-generation Tooway system now running through KA-SAT, and shown live in locations from Dublin to Athens, is a cost-effective and immediate response to users waiting to access the benefits of broadband irrespective of their location. Europe's broadband map shows that at least 13 million households are still beyond range of ADSL, and 17 million access the Internet at speeds below 2 Mbps, which closes the door to many media-rich applications that users today expect to use on a daily basis. Operated by Eutelsat's Skylogic affiliate, Tooway can provide homes with an always-on service delivering speeds of up to 10 Mbps downstream and 4 Mbps upstream. The customer equipment comprises a small satellite dish (77 cm) and a sleek modem, which is connected to a PC or Mac via an Ethernet connection. Customers can select professional or self installation. The equipment is installed by pointing the dish to 9 degrees East using an included sound beeper and following indications on-screen to activate the modem. The Tooway system can also be used for Voice over IP and IPTV. With a dual-feed (Ku-Ka), DTH reception of television channels from adjacent broadcast satellites is also possible.

KA-SAT will also respond to professional requirements for higher bandwidth and/or higher quality services for applications including private networks, broadband access for businesses and institutions, back-up services and remote monitoring (SCADA). For this type of use, the Tooway terminal can deliver speeds of up to 40 Mbps downstream and 10 Mbps upstream. An advanced system, which will shortly be available, will increase speeds to 50 Mbps downstream and 20 Mbps upstream. KA-SAT's high throughput Ka-band capability also opens opportunities for cost effective Satellite Newsgathering, including in HD, using lightweight easily transportable uplink antennas connected to the basic Tooway modem. Broadcasters and news agencies will be able to automatically schedule and book capacity via an Internet-based schedule. Broadcasters and video service providers can also take advantage of the spotbeam coverage of the KA-SAT satellite architecture to deliver content in a single beam or multiple beams for regional and local television and corporate TV networks.

Built for Eutelsat by Astrium, KA-SAT ushers in a new generation of multi-spotbeam high-capacity satellites. Its revolutionary concept is based on a payload with 82 narrow spotbeams connected to 10 ground stations. This configuration enables frequencies to be reused 20 times and takes total throughput to beyond 70 Gbps. The ground network uses ViaSat's SurfBeam® 2 technology, an advanced version of the technology already powering broadband connectivity for 500,000 satellite homes in North America. The combination of KA-SAT's exceptional capacity and SurfBeam 2 will make it possible to deliver Internet connectivity at speeds comparable to ADSL for more than one million homes in Europe and large parts of the Mediterranean Basin.