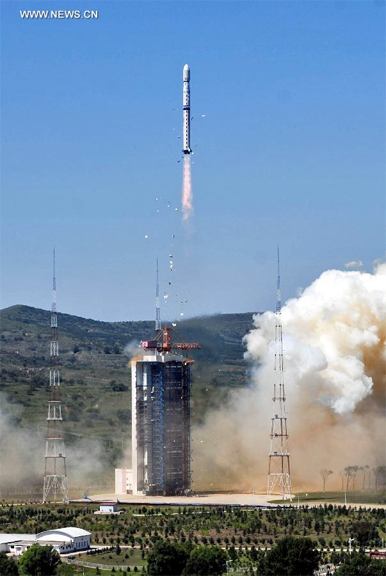 Photo is courtesy of Xinhua—Liu Chan.

[SatNews] China has successfully launched its most advanced Earth Observation (EO) satellite, the Gaofen-2, on Tuesday.

The Gaofen-2, the country's second high-definition satellite in orbit, was launched from the Taiyuan Satellite Launch Center in north China's Shanxi Province at 11:15 a.m. Beijing Time. The one meter long satellite was boosted by a Long March-4B carrier rocket. A small satellite from Poland was also carried aloft by the rocket, according to the State Administration of Science, Technology and Industry for National Defense (SASTIND). The craft will be used for geographic and resources surveillance, environment and climate change monitoring, precision agriculture, disaster relief and city planning.

The primary users of the satellite will be the Ministry of Land and Resources, the Ministry of Housing and Urban-Rural Development, the Ministry of Transport, and the State Forestry Administration, according to the SASTIND. The Gaofen-2 is the second of seven satellites to be launched for China's indigenous high-definition observation project Gaofen before 2020. The project was initiated in May of 2010.

Gaofen-1, the first satellite of the project, was launched in April 2013, and provides service for more than ten Chinese government departments including the ministries of land and resources, environmental protection and agriculture. It has also assisted China's search for the missing Malaysian airliner MH370 and played an important role in city development in Beijing, Hebei Province and Xinjiang Uygur Autonomous Region, according to the SASTIND.