Cobham Aerospace Communications and Inmarsat have launched their SB-Helo X-Stream™ helicopter SATCOM solution for Cobham AVIATOR SP systems — the new system will improve communications through rotor blades by reducing packet loss by as much as 40 percent.

Few solutions exist in the market to transmit data such as video imagery to a satellite network in the same way as is possible from fixed wing aircraft. This is due to the interference caused by the rotors, which leads to intermittent, jittery data streams and distorted video at the receiving station. 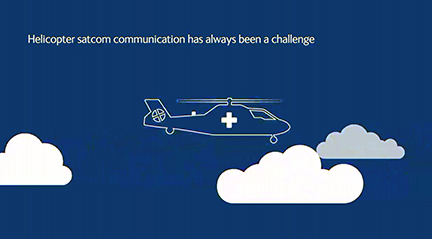 After extensive testing, Inmarsat and Cobham have developed a protocol in network Quality of Service (QoS) selection, as an enhancement of the Swiftbroadband X-Stream™ service; one of Inmarsat’s streaming services that offers guaranteed, on-demand, high-streaming data rates over its L-band network. This allows data from rotary wing aircraft to be transmitted to the Inmarsat satellite network, via dedicated modulation schemes. The increased resilience of the data pipeline passing through the rotors means that the transmission of high intensity data, like video, will see an improvement in throughput of around 37 percent.

The free of charge software update will allow a helicopter operating from a remote location to transmit a significantly improved video or data stream. This capability is crucial for organizations operating rotary wing aircraft in specialized roles such as search and rescue, medical evacuation and military forces.

Todd McDonell, President of Global Government at Inmarsat, said the company is happy to announce the availability of the SB-Helo X-Stream, an enhancement of the Inmarsat X-Stream service that meets the needs of this growing sector of the government market in an efficient and cost-effective way. Having worked with Cobham in the development of this new protocol, Inmarsat is pleased with the results the company has seen from the trials and foresee that this cost-effective solution will be greatly sought after in the growing government helo market.

Willem Kasselman, VP Sales, Marketing and Support at Cobham Aerospace Communications, added that the launch of this new system represents a breakthrough for Cobham, solving a long-standing problem in helicopter SATCOM communications. The partnership between Cobham Aerospace Communications and Inmarsat is an important one for us and we look forward to building on this announcement and expanding and improving other related services over the coming months.