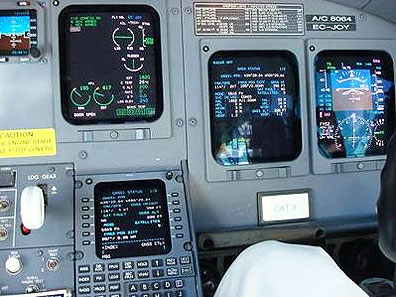 EGNOS-equipped aircraft cockpit. From March 2, 2011, EGNOS is open for use by aviation for runway approaches. The runway in question has to have a procedure written by an Air Navigation Service Provider and the aircraft be equipped with an EGNOS receiver and be certified for EGNOS operations. Credits: Eurocontrol
[SatNews] Pau Pyrénées in southern France has become Europe’s first airport to use the new EGNOS Safety-of-Life Service, to guide aircraft in for landing using only this highly accurate space navigation signal.

Clermont-Ferrand Airport in central France is also set to start using EGNOS – serving mainly business aircraft – while Marseilles Airport should also join them, selected as it is used by Eurocopter for helicopter certification. Le Bourget Airport is also scheduled to be equipped with EGNOS by the time the Paris Air Show starts in June. The European Geostationary Navigation Overlay System (EGNOS) combines geostationary satellites with a network of ground stations to sharpen the accuracy of and integrity of GPS signals across Europe. 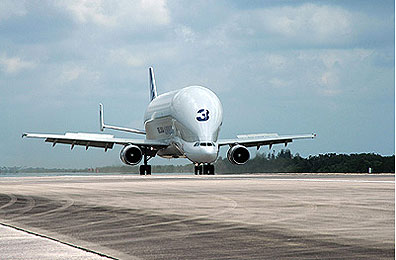 Beluga aircraft operated by Airbus Transport will soon be using EGNOS vertical guidance on approach to Pau Pyrénées in southern France, from later in 2011. Credits: NASA/Jim Grossmann
On March 2nd, the EGNOS Safety-of-Life Service was officially made available for the safety-critical task of providing vertical guidance to aircraft on final approach. This represents the culmination of 15 years work by ESA, the European Commission, the EGNOS Operator and Infrastructure Group - a club of seven European Air Navigation Service Providers - and Eurocontrol, the European Organisation for the Safety of Air Navigation. Eurocontrol is now working with the air navigation service providers in Europe, the airspace users and the national civil aviation authorities to promote the use of EGNOS. France’s Directorate General for Civil Aviation (DGAC) is among their most active partners. Beluga planes used for transporting Airbus aircraft parts between industrial sites all over Europe will be the first large EGNOS-equipped aircraft, with their first certification flights due to take place later this spring.