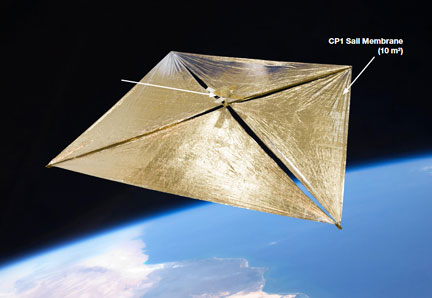 The small satellite demonstration experiment continues its descent towards Earth, lending key sail data to the design of de-orbit mechanisms for future satellites. One of NanoSail-D's main mission objectives is to demonstrate and test the de-orbiting capabilities of a solar sail for possible use in de-orbiting decommissioned satellites and space debris. The NanoSail-D engineering and science team at NASA's Marshall Space flight Center in Huntsville, Ala., have been monitoring the satellite's orbital characteristics since initial sail deployment. The team has learned that the satellite's attitude dynamics is causing it to orbit the Earth in a flat spin as opposed to a random tumble, or facing into the direction of flight. This flat spin attitude causes the spacecraft to encounter less atmospheric drag, or particles, keeping it in orbit longer than originally estimated.

"NanoSail-D has lowered its altitude above the Earth by approximately 28 miles (45 kilometers) from its original altitude of 400 miles (640 kilometers), and continues to descend," said Dean Alhorn, principal investigator for the NanoSail-D mission at Marshall. "Prior to launch, our original de-orbit analysis was based on a maximum drag attitude, which meant NanoSail-D would de-orbit in 70-120 days. Based upon NASA's current analytical assessments of the NanoSail-D tracking data, the team predicts NanoSail-D will continue to descend and eventually re-enter Earth's atmosphere and disintegrate six months to one year from sail deployment."

"The NanoSail-D mission is NASA's first compact structure to deploy in low-Earth orbit and will be the first solar sail to de-orbit," said Joe Casas, FASTSAT project scientist at Marshall. "The NanoSail-D mission continues to provide a wealth of data that will be useful in understanding how these type of de-orbit devices react to the upper atmosphere. The data we've collected from this small satellite mission is being evaluated in conjunction with data from the Fast, Affordable, Science and Technology Satellite, or FASTSAT, science experiments to better understand the Earth's upper atmospheric drag influences on satellite orbital re-entry."

As NanoSail-D continues to descend, the large tent size sail will become even more visible to novice and veteran sky watchers. North American viewing opportunities will begin again in the early evening of April 27 and continue for 10-14 days. Since the satellite's attitude is flat and the sail is highly reflective, the best conditions for viewing NanoSail-D are passes to the west of the viewer's location. The NanoSail-D experiment was designed and built by engineers in Huntsville and managed at the Marshall Center with design, testing, integration and execution of key nanosatellite activities by engineers at NASA's Ames Research Center in Moffett Field, Calif. This experiment is a collaborative partnership between the Department of Defense Space Test Program at Kirtland Air Force Base, N.M., and the Space and Missile Defense Command, the Von Braun Center for Science and Innovation, and Nexolve Corp., all in Huntsville and NASA. The NanoSail-D imaging challenge will continue through January 2012. For contest rules, satellite tracking predictions and sighting times visit http://www.nanosail.org.