[SatNews] When disasters strike, aerospace communication will be the "go-to technology" to facilitate long-range connectivity, enable rapid response to emergency needs and let survivors communicate with the external world.

This is just one of a plethora of critical future roles for Aerospace (Satellite) Communications described in 13 articles in the recent special issue of Proceedings of the IEEE on "Aerospace Communications and Networking," which covers the history, current trends as well as the future in the next two decades. Proceedings of the IEEE is the world's most highly-cited general-interest journal in electrical engineering and computer science. "Aerospace Communications have been addressed in issues of Proceedings of the IEEE in every decade since the 1970s," said Claudio Sacchi, Senior Member of IEEE and one of several guest editors of this issue. "This issue, however, takes a longer range look at the technology and addresses many important forecasts for the future of this technology."

According to the article, "Aerospace Communications for Emergency Applications," disasters such as Tsunamis in Indonesia (2004) and Japan (2011), Hurricane Katrina along the U.S. Gulf Coast (2005) and earthquakes in Italy (2009), Haiti (2010) and Chile (2010) underscore the urgent necessity to immediately restore a minimal level of connectivity. This is done via the integration of the aerospace segment with terrestrial backbones and ad hoc terrestrial networks for both data connections and assisted localization. Authors Matteo Berioli, Antonella Molinaro and Simone Morosi, and Sandro Scalise, Senior Member of IEEE, make a strong case that whether a disaster is natural or manmade (massive terrorist attacks belong to this last category), terrestrial wireless and wired network infrastructures could be severely damaged and become completely unusable. In such scenarios, communication satellites and high altitude platforms (HAPs) can be the emergency backbone of choice for long-range connectivity.

Satellites are going to have to play a key component in next-generation TV services, "to provide the breadth of entertainment and information choices consumers will demand," predicts the article "The Future of Satellite TV: The Wide Range of Applications of the DVB-S2 Standard and Perspectives." Authors Vittoria Mignone, Maria Angeles Vazquez-Castro and Thomas Stockhammer, Senior Members IEEE, discuss many perspectives of digital TV and HDTV broadcasting and ongoing and future standardization activities as well as satellite hybrid and Internet Protocol TV. According to the authors, "Standardization will provide the bridge for mass market adoption and new standardization efforts are expected and will be necessary to fulfill the daily rising user demands and expectations. Satellite distribution is looking into a bright future as quality will matter more and more in emerging TV services."

Satellites are also spotlighted as the new broadband frontier in a paper by Ernestina Cianca, Member IEEE, Tommaso Rossi, Asher Yahalom, Yosef Pinhasi, John Farserotu and Claudio Sacchi, Senior Members IEEE. Not only is the current state of research and technology in EHF satellite communications discussed but the authors also review related future perspectives on applications and services. Entitled "EHF for Satellite Communications: The New Broadband Frontier," the paper makes a strong case for the potential advantages from the transmission of satellite data in the millimeter-wave domain that have been known for years and also acknowledges that, as usual, the passage from theoretical appraisement to technological development is not so straightforward. 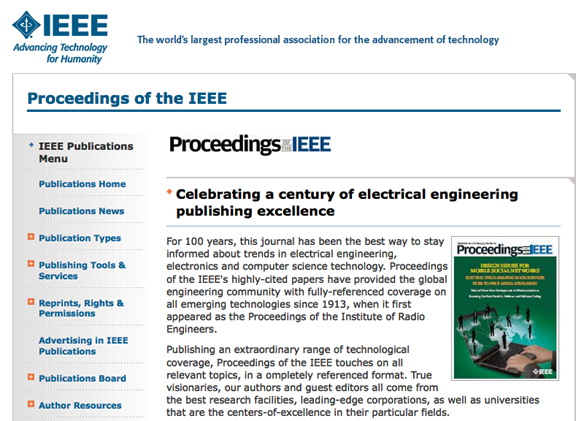