[SatNews] "..the opportunity... to gain access to employees who want to work in our industry and who have served our country is a great benefit; it is a win-win situation.“

The Satellite Broadcasting and Communications Association (SBCA) announced today that it has committed to promote the hiring of 4,000 qualified veterans and military spouses into the consumer satellite industry by 2014 as part of the U.S. Chamber of Commerce’s Hiring Our Heroes program. 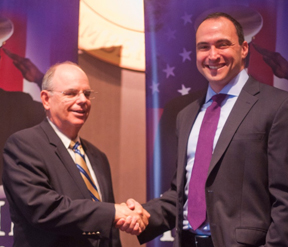 “Hiring Our Heroes offers recruiting fairs and the opportunity to connect with veterans nationwide. We feel our members and the industry will be able to take advantage of the Hiring Our Heroes program,” said Joseph Widoff, Executive Director of SBCA.  “By offering our members the opportunity to gain access to employees who want to work in our industry and who have served our country is a great benefit; it is a win-win situation.“

SBCA has hundreds of members in all segments of the satellite service industry representing platform providers, distributors, manufacturers, installation providers, retailers, trainers and technicians. The Association is governed by a Board of Directors that includes DIRECTV, DISH Network and executives from our various industry segments.  Member companies are encouraged to make company pledges through the Association by contacting Amy Hager (ahager@sbca.org). SBCA will strongly encourage its members to attend Hiring Our Heroes job fairs in hopes of hiring veterans and military spouses into the industry.

“Hiring Our Heroes and SBCA have a common goal in connecting employers to the most talented members of the workforce available, making this partnership a natural fit,” said Lt. Col. Kevin Schmiegel (Ret.), executive director of the U.S. Chamber’s Hiring Our Heroes program. “We’ve learned from the inception of the program that it takes collaboration between organizations like ours to make a difference in the staggering unemployment rates facing veterans and military spouses.  Together Hiring Our Heroes and SBCA will demonstrate to employers that hiring a veteran isn’t just the right thing to do, it’s the smart thing to do.”

The commitment is part of the “Hiring 500,000 Heroes” campaign, an initiative launched in March by the U.S. Chamber, National Chamber Foundation, and Capital One. The goal is to secure commitments from businesses throughout America to hire a half million veterans and military spouses by the end of 2014.In March 2011, the U.S. Chamber, in conjunction with the National Chamber Foundation, launched its Hiring Our Heroes program, a nationwide effort to help veterans and military spouses find meaningful employment. The program was implemented to improve public-private sector coordination in communities where veterans and their families are returning every day. To date, Hiring Our Heroes has hosted more than 230 hiring fairs in 48 states and the District of Columbia, helping more than 10,400 veterans and military spouses find employment.