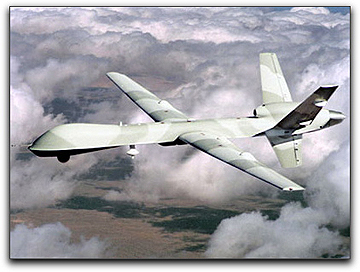 A US$58 million contract has been awarded to Raytheon Company by the U.S. Air Force for the firm to work on unmanned aerial vehicles. Specifically, the contract is for the Reaper program and updated/new targeting systems. The contract is to improve the UAVs surveillance capabilities. Already US$9.5 million has been allocated. Last year, in November, the U.S. Army selected Raytheon to provide the service with a common sensor payload (CSP) for manned and unmanned aircraft. The Reaper, (also known as Predator B), is an outgrowth of the combat proven Predator A UAS. The UAV became operational in 2007 when it started flying combat missions over Afghanistan. This Medium Altitude Long Endurance UAV overcomes most of the difficulties encountered with previous UAVs that must compromise between conflicting demands for payload, speed, altitude, speed and persistence. With an operational ceiling of 50,000-ft, and higher cruising speed, Reaper can cover a larger area, under all weather condition, carrying payloads of more than 1.5 tons. The aircraft is powered by a single Honeywell TP331-10 engine, producing 950 shp, provides a maximum airspeed of 260 kts, and a cruise speed for maximum endurance of 150-170 kts.
Topical Tags :
Manufacturing
Military
Regional Tags :
North America